On October 1st, feast day of St. Therese of the Child Jesus, the first three Servidoras arrived in the Middle East to found the Community of “Maria Jerosolimitana.” On the second of October, the feast of the Guardian Angels, we began to study Arabic. Today, there are more than 15 communities in the region, and the years have been full of blessings. Here we would like to share with you the sermon preached by Fr. Gallardo, IVE Provincial Superior, during the Mass of Thanksgiving for the anniversary of this mission.

It has been a little more than 20 years since October 1, 1995, when the first three Servidoras arrived in the Middle East. They did not know quite what to expect, and so, among the other items in their suitcases, they brought along potatoes and onions, to the astonishment of the security guards. It was the feast of St. Therese, patroness of the missions, and the young sisters (Contemplación, Pia, and Cielo) accepted the challenge to ‘not be evasive to the missionary adventure’. Onward to the adventure that awaited them! The Patriarch had accepted that they had come to learn the language and that from there God would show the way. This path would end up bringing them from Bethlehem to Egypt, to Jordan, to Gaza, to Tunisia, to Syria… and here in Bethlehem where they began, the Hogar Niño Dios, in whose chapel we are celebrating this Mass.

In this homily, I would first like to refer to the words of Our Lord: Go out all over the world and preach the gospel to the whole of creation (Mk 16:15). In the second place, I would like to mention some of the advice given by St. Therese to her little missionary brother, Father Maurice.

Our coming to the Middle East is the result of having listened to these words of Our Lord with the desire of putting them into practice: Go into the whole world and preach the Gospel.

“Go into the whole world,” means going into every continent, every country, every city, every town, and by every path, till their utterance fills every land, till their message reaches the ends of the world. (Ps.19:5). This desire to preach the Gospel expressed beautifully by St. Therese in her writings: Ah! In spite of my littleness, I would like to enlighten souls, as did the Prophets and the Doctors. I have the vocation of the Apostle. I would like to travel over the whole earth to preach Your Name and to plant Your glorious Cross on infidel soil. But O my Beloved, one mission alone would not be sufficient for me, I would want to preach the Gospel on all the five continents simultaneously and even to the most remote isles. I would be a missionary, not for a few years only, but from the beginning of creation until the consummation of the ages.[i]

“To the whole of creation” means to all men of every race, of every nation, of every religion. It means to each and every person, because Christ shed His blood for all.

“To the whole of creation” also means helping creation to be redeemed through the Christian life: creation that groans as if in labor-pains when men do not see her connection to God, her Creator. “To the whole of creation” implies evangelization of the culture, because all that is of man ought to be placed in relation to Christ: the arts, politics, education, language, sciences, sports… because they were all created through him and in him (Col. 1:16).

The Gospel says that the disciples preached everywhere and that the Lord worked through them, confirming their words with the signs that accompanied their preaching. This continues to happen with missionaries. What are these signs for us? Religious life itself is a sign, and therefore, as shown by the Church’s documents of consecrated life, it is a sign, a prophecy; in itself and when it is well lived, it is a declaration of Christ, for the religious desires to be a continuation of the Incarnation, to be another Christ. The Second Vatican Council teaches that the religious life clearly shows all men both the unsurpassed breadth of the strength of Christ the King and the infinite power of the Holy Spirit (LG 44).

St. Therese was the Carmelite spiritual mother of a priest who was preparing to be a missionary in Africa. Whenever she referred to him in her prayers or in her letters, she called him my dear little brother (mon cher petit Frere). Some thoughts from her letters could help us rekindle our missionary spirit.

When she wrote her first letter, St. Therese, at only 24 years of age, knew that she was sick from tuberculosis and would die very soon (in fact, she would die in less than a year). Father Maurice had just overcome a great crisis, which included the temptation to leave his religious vocation.[ii] In the letter, St. Therese gives thanks to God that Fr. Maurice came out of the storm victorious, and she reminds him that such tests are part of the life of those called to guide souls.

Later she added, I am asking Him that you may be not only a good missionary but also a saint all on fire with the love of God and souls[iii]. This is what we ourselves must also always desire. We must not be satisfied with simply being in the mission, with simply being good or accomplished; we must truly desire to be holy missionaries and apostles.

Whenever Father Maurice would undergo different trials, St. Therese would remind him: The greatest honor God can give a soul is not to give it much but to ask much from it![iv]

Knowing that Fr. Maurice was suffering from family difficulties, she told him: [The Lord] knows the extent of your sacrifice, He knows the suffering of those dear to you increases your own, but He also suffered this martyrdom. To save our souls, He left His Mother, He saw the Immaculate Virgin standing at the foot of the Cross, her heart transpierced by a sword of sorrow.[v]

Thus, we must never complain about God, about the trials He sends, about spiritual aridity, misunderstanding, nor the difficulties that can happen in our families. We must give thanks to God that we have been sent to a difficult mission, with a difficult language and a very distinct culture, where Christians are a minority and, in some of our missions, are persecuted to the point of shedding their blood. God asks much of us because He has called us to be missionaries. In this, Jesus Christ is also our model.

Saint Therese also suffered very much. She herself divides her life into three stages: the first goes up to when she was four years old and was a time filled with joy and peace. The second stage, from four to fourteen years of age, was one of great suffering due to the death of her mother. During that time, when Therese was ten years old, her sister Pauline, who had taken on the role of mother for Therese, left her to enter Carmel. When she was fourteen years old, on Christmas Day, God changed her and miraculously healed her extreme over-sensitivity. From then on, God would ask more and more of her, for her soul was mature enough to give Him everything.

She knew what she was talking about when she wrote to Fr. Maurice: …Our Lord never asks sacrifices from us above our strength. At times, it is true, this divine Savior makes us feel all the bitterness of the chalice that He is offering our soul. When He asks the sacrifice of all that is dearest in this world, it is impossible, without a very special grace, not to cry out like Him in the garden of agony: “Father, let this chalice pass from me…however, may your will be done and not mine.”(cf.Mt.26:39)[vi]

There are other things in her letters that can help us.

Pray for all those who will encounter us in the mission.

Father Maurice asked St. Therese to be the godmother of the first child he baptized in the mission. She accepted, from that moment on placing that child under the protection of Our Lady and St. Joseph, and, even though she did not know the child, she prayed for him. Prayer and union with God are the soul of the mission. Because of this, in whatever place or mission we may be, the first and most important thing to do is to pray, and to pray well, loving God more and more every day and uniting ourselves to Him more and more perfectly. Prayer is always the soul of the mission.

Father Maurice asked St. Therese to pray that he might gain the palm of martyrdom. She then admitted to him that she also had requested and desired martyrdom for herself, but that God had only allowed her the martyrdom of love, hidden in Carmel. She wrote that she very much admired St. Joan of Arc and wished to be like her, but that God had allowed her to understand that she should not fight to be crowned by a mortal king, but rather to love the Immortal King and to seek that all hearts submit to him. The great work that God continually asks of us is what St. Therese used to call the monotony of sacrifice, which she preferred to ecstasy (A l’extase je préfère la monotonie du sacrifice).

Accepting the will of God.

Already close to death, she wrote the following to her little brother: …how happy I am to die! Yes, I am happy, not at being delivered from sufferings here below (suffering united to love is, on the contrary, the only thing that appears to me desirable in this valley of tears). I am happy to die because I feel that such is God’s will, and that much more than here below I shall be useful to souls who are dear to me…[vii] Those of us in the mission ought to die every day in little and big things; it is the way to bear fruit, dying as the grain of wheat and doing it with joy. We must be happy to die for Christ in the mission.

On this day, we give thanks to God for the 20 years that the Servidoras have been present in the Middle East. We give thanks to God for our missionary vocation in the Religious Family of the Incarnate Word. We particularly beg Our Lady that she grant us the grace to never lose a holy enthusiasm for the mission, and that, though the old man grow weaker with the passing of the years, his soul may not tire but may always rejoice in believing in and preaching Jesus Christ, the one and only Savior. 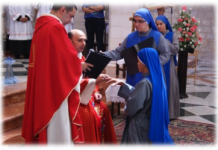 Visit of Fr Carlos Walker, General Superior of the IVE, to the Holy Land