Reflections, in the form of a chronicle, on the Easter celebrations in Hong Kong, where nearly 100 people were baptized in the parish entrusted to our Institute.

They, accepting the word [of Peter], were baptized; there were added that day about three thousand souls (Acts 2:41). I always wondered what that ceremony must have been in which they were baptized, probably by all the Apostles – there were so many people, devout men from every nation under heaven (Acts 2:5). It was an apotheosis, I imagine, by the number, diversity and importance. Certainly it must have been a scene worth seeing, which endured in the memory of the early Christians, and which the Evangelist Luke has narrated for us in the Acts of the Apostles.

Let me tell you what happened here in our Parish of “St. Peter and St. Paul” in Yuen Long, Hong Kong, at the Easter Vigil and on Easter Sunday. There occurred something wonderful, beautiful, spectacular, exciting, which moved the depths of the soul: during the Easter Vigil Mass, 68 adults were baptized, received First Holy Communion and were confirmed: 68 men and women ranging from ages 15 to 93. And the next morning, at Mass on Easter Sunday, 23 infants received the sacrament of Baptism. 91 neophytes, 91 new sons and daughters of God in our parish.

The Easter Vigil in itself is a ceremony which, with the unfolding of its various signs, illumines and moves the heart, filling our souls with every kind of spiritual fruit. But some parts or signs that were once somewhat “far” for me, being in Argentina, such as baptisms and confirmations at Easter Vigil, the blessing of the baptismal font, among other things, became here something vivid and complete: 68 people were baptized and confirmed, and were coming for the first time to receive the Body and Blood of the Lord, who had immolated Himself for them on Good Friday and who at that moment stood victorious over death, also raising them from the death of sin, as he did with us and with all the children of the Church since that first Holy Night, the most holy and blessed of all. It’s like, as it were, a palpable and immediate application of the effects of the Paschal Mystery in the world and in the Church.

While I watched Fr. Gervais pouring water over their heads one after another, and as I listened to him pronouncing the Trinitarian formula, my mind and my heart were filled with prayers, thoughts and feelings that are impossible to summarize in a chronicle, but I can say that I remembered that in the Diocese of Hong Kong at that moment they were being baptized more than 3,500 souls (yes, three thousand five hundred), as in the first Pentecost of the Church, and that there would be baptisms in all parts of the world (I had read that in France 3,000 were to be baptized that night); I thought of all those, whether we know it or not, worked, suffered, preached, prayed for these souls here and now, even those from other parts of the world and of history, beginning with Jesus Christ, the only one through whom the sacraments are effective and any of the efforts of the missionaries is fruitful.

I reflected on how God, in His infinite mercy and by His grace, had chosen and touched each of these souls, had called and summoned them to be part of His Church, giving them the grace of conversion. I was thinking about the year and a half of catechumenate and catechism classes by means of which they were prepared; they had been persevering and enthusiastic, and today the preparation had reached its goal: the beginning of a new life, an abundant life as God’s children. I thought about their catechists and those who taught the doctrine, those who preached to them and gave them an example.

It was moving to see a 93 year old Chinese lady in a wheelchair receiving baptism, along with her son. Or to know that among them was a 15 year old who had to go against his entire family in order to be baptized. There were several seniors who were baptized, which means a total conversion of life, from atheism or other religious traditions, Buddhist, Taoist or folk, and sometimes from family and social environments completely alien and hostile to the Faith. I imagined that the Easter Vigil in antiquity, in the early centuries of the Church, must have been something like what we experienced tonight. I happened to live through it for the first time. I had the grace and the joy to confirm them along with Fr. Gervais, and to give them First Holy Communion.

To all this, there was added the overflowing joy of the whole community, as if being a foretaste of Heaven: joy of the godfathers and godmothers, many of whom are friends and very active laity in the parish; of the nearly 20 altar boys who served at the altar devoutly and solemnly; of the parish choir putting their soul in each note, and the faithful, so bursting with joy even as they were huddled in the pews, given that almost one third of the banks were occupied only by the catechumens and godparents (and that is one godparent for each baptized, if not, the Church would not be able to hold everyone …). Joy permeated through the entire ceremony, which lasted nearly three hours, but the time passed as if it were a moment. In our parish, this has been the largest number of baptisms in many years. After the religious ceremony, there followed the (unending) session of photos, something almost religious for the inhabitants of these parts … And then, with those who wanted to stay, we held festive celebrations in the basketball court of the parish school. It was just after midnight when the last ones took leave (the vigil had begun at 8 pm).

On this blessed night, “when heaven is wedded to earth and man is reconciled with God!” (Easter Proclamation), the soul that contemplates the mystery of the Redemption becomes enriched and expanded by the joy and the love of God and of Jesus Christ, who by his whose Paschal Mystery, makes his Bride the Church, a Mother fruitful in children, forever young, for over 2000 years. And he sometimes gives us the grace to see his work, and it is a great joy to see these things as a missionary.

91 is a big number. Personally I always have the fear that we would remain in the anecdotal or extraordinary number, and run the risk, especially us, the younger ones, of thinking – sometimes almost unconsciously – that success lies in the quantity, but of course we are very joyful, and rightly so, they are many who receive the gift of Grace. But on the cross, there were only a few with Christ; after His death and resurrection, they became thousands. And although we desire and we  strive with all our strength to expand the Kingdom of Christ to as many as we can, and dream that we would baptize until our arms got tired (I did not ask, but I think that the hands of P. Gervais must have become somewhat tired on Saturday), we do not ever fall into the temptation of believing that apostolic success is numerically quantified, or that our faith is diminished if we only read these things in chronicles, despite the loyalty and the efforts realized; to be never discouraged or work lesser if for Sunday Mass we have “only” 20 or 30 people, as happens in Taiwan and in Greenland (and in many other places). Knowing that there is great joy in heaven over one soul that is converted, and that one’s own soul is saved because let him know that whoever brings back a sinner from the error of his way will save his soul from death and will cover a multitude of sins (Jas 5, 20).

When I had the beautiful and unforgettable experience of doing mission in a place where for years we priests could not have anyone in our Masses and Paschal Vigils, I personally took courage, as they say of St. Paul (Acts 28.15), reading the chronicles of the missions of my brothers and sisters of the religious family (how much I owe and thank you!) and by Faith, I saw myself there with them, doing missionary work with them, mystically united in Grace, fruitful by the Paschal Mystery of Christ. Something that by the grace of God, we are clearly taught in the seminary, something we missionaries repeat often, a teaching which everyone should later live out in the mission, leading to the complete mortification of self. Today God gave me the grace of seeing and living, but almost as a newcomer, this other reality and I wanted to share this with you; in particular, my mind flies swiftly to the missionaries and the Christians who are “in the shadows” who are found in many parts of the world, near and far from Hong Kong. Therefore I also want to dedicate this joyful news and my poor reflections, particularly to those missionaries in lands of martyrdom and in the emblematic missions, to priests, religious and laity; those who are under bloody wars, and also those facing bloodless, silent and heartbreaking battles; to missionaries, being faithful to their vocation and their duties of their state, seem to have sown among stones and thorns, sometimes, for a whole lifetime; those who mission through the arid task of teaching and publications; to both contemplative branches who “silently fertilize History” (Blessed John Paul II), to the sick and all who suffer in body and soul and pray for missions. These are the fruits, because these neophytes were born from the pierced side of the Lord, but also from those who, faithful to the Master, shed every drop of their blood on the crosses that he sends to each. And to think that what we see on this earth is but a shadow! How great will be what we will enjoy in Heaven! We know that God is never outdone in generosity!

I request all of you to continue helping us with your prayers and sacrifices so that our neophytes would always be like those who, hearing the word of St. Peter, devoted themselves to the apostles’ teaching and fellowship, to the breaking of bread and the prayers (Acts 2:42). Thank you very much!

At another time, I will tell you how the catechumenate for adults and the Catechism classes for the children of the parish are organized, which is very interesting.

God bless you and grant a Happy Easter to everyone! 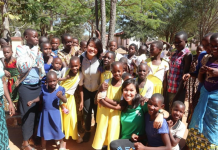 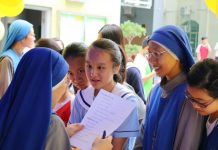