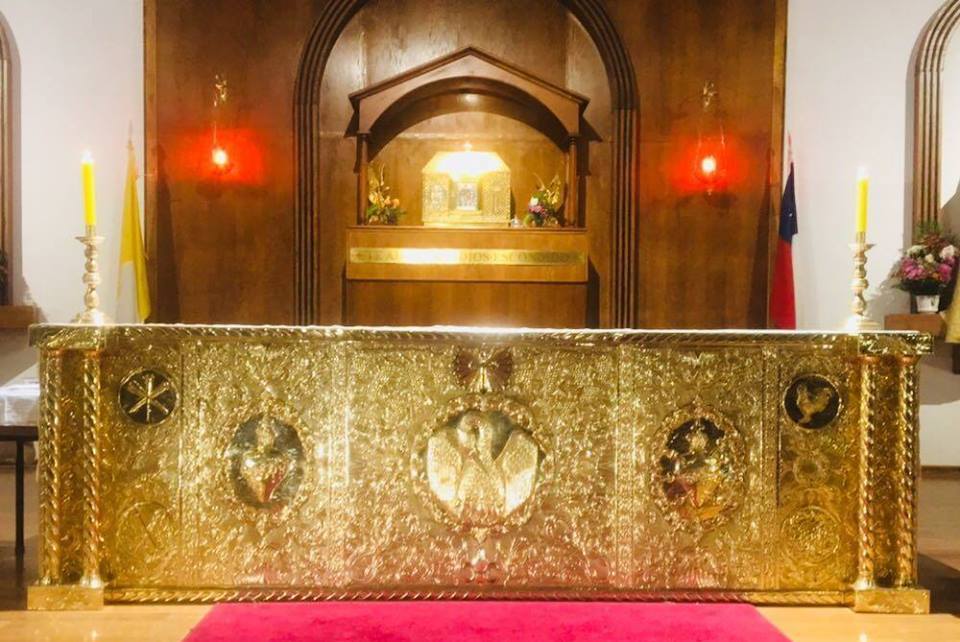 A “facade” for the Altar

When someone enters a Catholic Church, without a doubt, the altar is what first calls the attention, being the center and heart of the whole church, where the very Sacrifice of Christ is made present.
That is why, since the beginning, the Church has striven that the altar be made of stone (because the altar is Christ, the Rock), she consecrates it, blessing it with holy chrism, she adorns it with worthy decorum, illumines it with candles, increases its beauty with flowers and artistic fronts, and places in the altar relics of martyrs and saints… because a upon the altar, as upon the paten, wrapped in the white Eucharistic species, shall be placed the same Christ who was wrapped in swaddling clothes by the Virgin Mary and placed in the manger.
It is the Sacrificial Altar, where in an unbloody manner the same sacrifice of Christ on the Cross is renewed, and it is also the heavenly banquet table. Thus we read in the General Instruction of the Roman Missal (#296): “The altar, on which is effected the Sacrifice of the Cross made present under sacramental signs, is also the table of the Lord to which the People of God is convoked to participate in the Mass, and it is also the center of the thanksgiving that is accomplished through the Eucharist”.

No one can doubt that upon the altar the most important event occurs!

In #299 of the same Instruction of the Missal, it is explained that: “Moreover, the altar should occupy a place where it is truly the center toward which the attention of the whole congregation of the faithful naturally turns”. And in #303 it says that the altar should be “fixed” and “skillfully made”.

We have begun this chronicle reflecting on the importance of the altar because one month ago, in the parish of “Jesus the Good Shepherd”, which is under the care of the IVE in Santiago (Chile), thanks be to Divine Providence which sent a generous benefactor to us, we have sought to embellish the sanctuary, and especially the altar of the Church, by adding a “façade” of embossed and chiseled bronze, measuring 3 meters wide and 94 centimeters in height. It is the work of a Chilean metalworker, Luis Badillo Gaete.

It is important to explain that the parish is located in a district known as “El Castillo” (The Castle); according to the Chilean newspaper “La Tercera”, in an article dated October 17, 2017, “El Castillo” is considered one of the most critical areas of Santiago. It is an area where its inhabitants suffer much due to the use and sale of drugs, which in turn produces an increase in violence, murder, and theft. Nonetheless, in this humble neighborhood, there are many fervent Catholics who love and defend their Catholic faith.

Some criticized us for endeavoring in a work of this scope in a place so insecure and vulnerable, but thanks be to God, we never doubted whether we should do this, since we have learned this from our beloved Congregation and from its charism: “evangelize the culture”. As our Constitutions teach (#30) “all its members to work in supreme docility to the Holy Spirit and according to the pattern of the Virgin Mary, in order that Jesus Christ be the Lord of all that is genuinely human, even in the most difficult situations and under the most adverse conditions”. When we studied in the seminary of “el Chañaral” or “La Finca”, back in the year 1990 our formators taught us: “for the simple and humble people, the best”.

So that you can greater appreciate this work, we will describe some of its details:

Description of the “facade” of the Altar
1. The Pelican

In the center is to be found the image of “The Pius Pelican” or “the Good Pelican”, in Latin “Pie Pellicane”, feeding its three young.

This is one of the oldest symbols of Christian iconography; in fact, it appears represented practically since the beginning of Christianity.

The pelican, as history tells us (even accounted in the Physiologus, a text from the 2nd cen d.C), to keep its young from dying of hunger during times when food was scarce, the pelican will wound its breast with its own beak and nourish its young with its own blood.

In light of this tradition, it is easy to understand why the first Christians adopted the motif of the Pelican as a symbol for Christ, the Redeemer who gives his life to deliver those who are his own from the death of sin, and nourishes them with his own Body and Blood in the Eucharist.

The Pelican is a symbol for Christ, and not only this, but it is one of the most significant and moving symbols.

Whoever enters a Church and sees the image of the Pelican with the eyes of faith, immediately there is presented to their soul the message of the love of Christ Crucified who surrendered himself to the passion and death on the cross for each of us (Gal 2:20). The blood that the pelican offers to its young represents the Body and Blood of Christ offered in sacrifice for the salvation of the human race, thus it is likewise an image for the Eucharist.

In this image of the Pelican there is also manifest the profound message of Christ: to give of one’s life for their brothers. This image makes visible the very words of Christ (Jn 15: 13) “No one has greater love than this, to lay down one’s life for one’s friends”.

This is why the image of the “Pelican” is found in numerous works of art: sculptures, bas-reliefs, paintings, stained glass, and even literary texts.

St. Augustine, commenting on Psalm 101, makes a parallel between Christ and the Pelican. Also Dante, in his Paradise, refers to Christ as “our Pelican”, and even Shakespeare, in Hamlet, places in the mouth of Laertes a reference to the legend of the pelican: “To his good friends thus wide I’ll ope my arms, and, like the kind life-rendering pelican, repast them with my blood”.

It is St. Thomas Aquinas, above all else, who in his unsurpassable Eucharistic hymn, “Adoro te devote”, signals Jesus as the “Pius Pelican”:

Deign, O Jesus, Pelican of heaven,
me, a sinner, in Thy Blood to lave,
to a single drop of which is given
all the world from all its sin to save.

Facing the altar, left of the Pelican, there is the Sacred Heart of Jesus, which reminds us of the sorrows of his soul, the suffering of the heart of Jesus during his Passion, that pain, greater and more mysterious than any physical pain; the sorrow and desolation of soul which accompanied Jesus throughout the entire Passion, but which is especially manifest in the Garden of Gethsemane.

To the right of the Pelican, the Sacred Heart of Mary can be seen pierced by seven swords, which remind us of the seven sorrows of the Virgin; She, in her pain also suffered for us and for our salvation, for this reason the Church has given her the honorable title of “Coredeemer”.

3. Some elements of the Passion

Crowning the Pelican there appears the Cross of Christ with its power, and in the four corners of the altar piece, framed in small circles, some of the instruments are seen which remind us of the different moments of the Passion: the three nails, the scourge, the crown of thorns, and the rooster which primarily calls to mind Peter’s denials, but also the abandonment by his friends and the treason of Judas.

Four columns bear the inscription of the initials of the four evangelists who transmit to us the words and deeds of Jesus, in particular recording the institution of the Eucharist (Matthew, Mark, and Luke) and the Bread of Life discourse (John).

Clusters of grapes adorn the façade, and wheat are on the top and bottom of each column: the elements which produce the material for the sacrament of the Eucharist, the wine from grapes and bread from wheat. There are to be found different kinds of leaves and flowers, such as the flor-de-lis (under the pelican) and roses which crown the heart of the Virgin. There are also fruits such as pomegranates and pineapples which symbolize the fruits which those who remain united to Christ ought to produce.

6. The Initials of the Institutes

The initials of the Institutes of the Incarnate Word (VCFE) and the Servants of the Lord and the Virgin of Matará (SSVM), etched in the bronze of the façade, so that every Mass which is celebrated here shall also be celebrated for al l of the members of our beloved Religious Family.

Two last things in conclusion: first, we would like to thank our beloved Institute of the Incarnate Word, since from the Institute we have received what we call the non-negotiable elements [of our charism], among which we find, “The dignified celebration of the Holy Mass”. Thank you for having inculcated in us the importance which ought to be given to the celebration of the Holy Mass, and likewise the reverent manner of celebrating it. Thank you for having taught us the emphasis which must be given to the liturgical life. And thank you for having transmitted to us a strong Eucharistic devotion.

In second place, we would like to thank the Gutierrez family who generously collaborated in order to realize this work of art. We pray for them and for all their intentions.

In the Incarnate Word and his Most Holy Mother Mary,