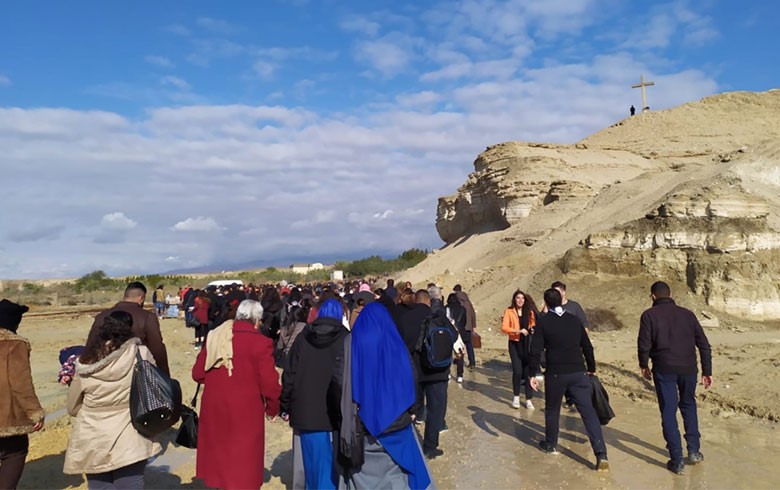 The Superior’s Meeting for the SSVM Province of “Our Lady of Sorrows”, (Jordan, Syria, Palestine and Israel), was held in Jordan this past January, from the 7th to the 10th.

The majority of the Mothers arrived on January 6th and were able to participate in the Koptic rite’s Christmas Mass, celebrated by the IVE priests present in Jordan: Fr. Marcos and Fr. Iusef. Afterwards, there was a dinner with the Religious Family and gift-giving for the children and youth of our Homes in Anjara.

On the 8th, there were different conferences throughout the day. On the 9th, during the Holy Mass celebrated by Fr. Victor Moreyra, missionary in Anjara, together with all of the superiors present, we consecrated the Province to the Blessed Virgin of Anjara.

Before the image of the Virgin, which wept tears of blood on May 6, 2010, we renewed our love and devotion to our Most Holy Mother, promising to be faithful to our fourth vow and not to forget Her sorrow. We placed each of our communities and the needs of our Province in Her hands… because we are entirely Hers so that we may be entirely Jesus Christ’s.

The meeting finished on Friday, January 10th, with the solemn Mass at the Shrine of the Baptism of Our Lord, next to the Jordan River. It was presided by the Rev. Archbishop, Msgr. Pierbattista Pizzaballa, and concelebrated by several bishops and priests. Two buses went from the parish of Anjara, bringing the religious together with parishioners, children and youth from our the Homes cared for by our Religious Family.

The Shrine, still in a state of construction, was filled with faithful from different parishes all across Jordan and from other places as well. During the ceremony, at the solemn moment of blessing with the water from the River Jordan, we observed the great devotion that the local Christians have for this ceremony.

Although the Shrine is not yet finished, it was not an obstacle for us to solemnize the day. There was a true atmosphere of festivity, especially with the 20th anniversary of the beginning pilgrimages to this part of the Jordan. The Christians have “their place” there, next to the Jordan, simply because it was the chosen place where the Most Holy Trinity was made manifest in the mystery of the baptism of Our Lord: in the voice of the Father who declared: “This is my beloved Son, with whom I am well pleased”, and the Holy Spirit descended upon the Incarnate Word in the form of a dove (Mt. 3:16-17).

After the conclusion of the Mass, we were able to visit the archeological cites adjacent to the Shrine, next to the Jordan: The Church of St. John the Baptist, where the remnants of three Churches were found, dating from the IV, V and VI centuries; the Home of St. Mary of Egypt, where she spent 47 years in prayer and penance, according to the testimony of an ancient monk, Zosimo.

May the Most Holy Virgin grant us the grace to deepen our love of the Most Holy Trinity daily, and to treasure the invaluable grace received by means of our baptism.

In Australia, Cialis is sold in doses of 2. buy cialis south africa The advised dosage depends on how often you intend to use the pill and other medications that you have already taken.