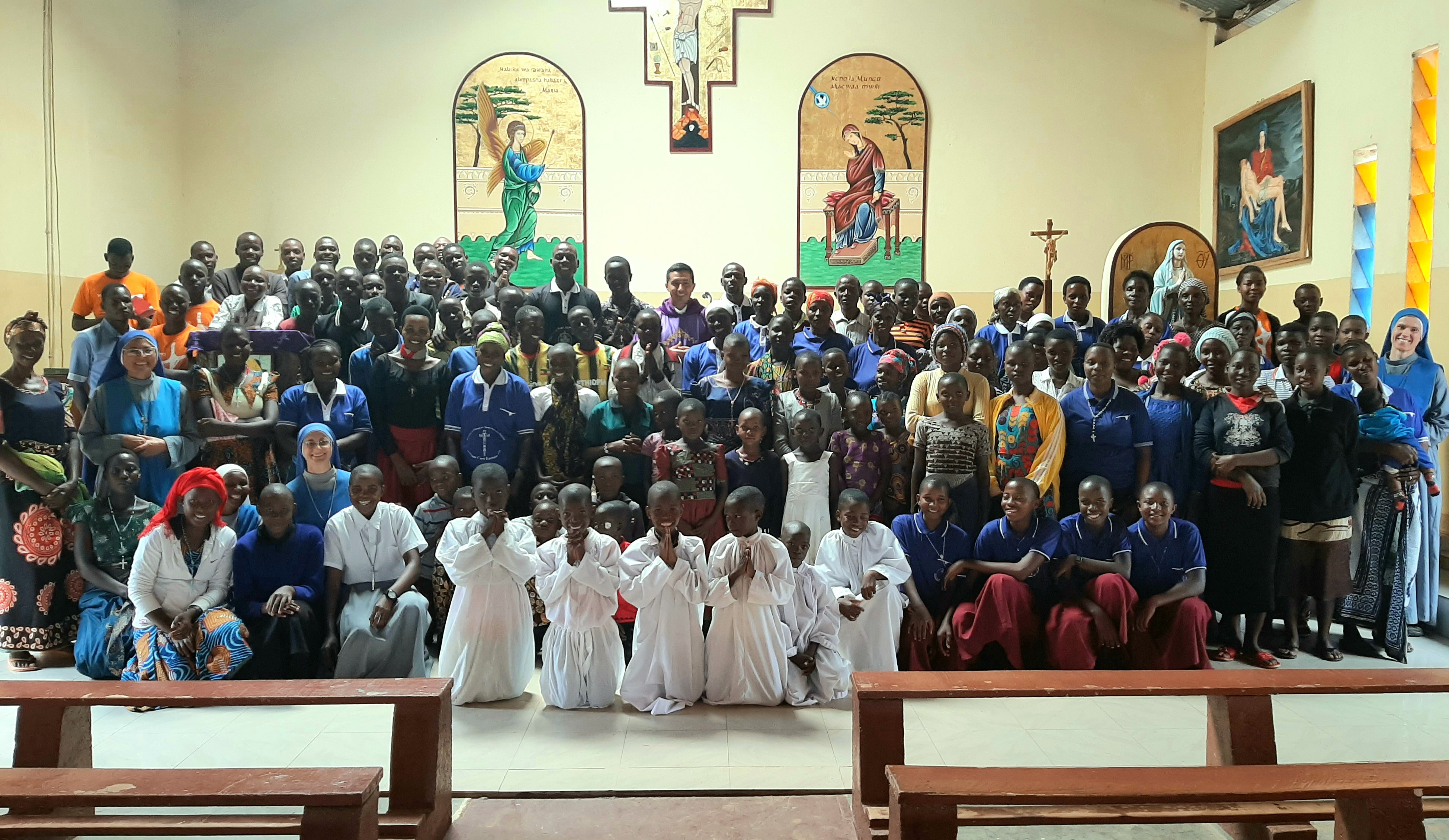 With the celebration of Ash Wednesday, we have begun Lent, a time in which one of the traditions that we have as Catholics is to restrict ourselves from using the word “Alleluia,” a term that is used during the rest of the year with great joy. Now, this tradition is used particularly in the Liturgy, especially in the Mass, but we can also take advantage of this “fast” of the word “Alleluia” outside of the Mass as a way of accumulating our joys for the great celebration of the Resurrection at Easter. But in these days, I personally have not been able to restrict myself, at least spiritually. I will explain why.

As you may have heard, the Secular Third Order here in Tanzania officially started on December 25, 2018 and now we have more than 250 members. Since then we have been able to meet with them every 2 months in the Feasts of the Religious Family or in regular meetings. This past Saturday we met with about 120 people for one of these regular meetings. For them, these events are like a day of retreat, of formation and of community time. There is always a time for Eucharistic Adoration with opportunities for confession, the praying of the rosary and time for guided Lectio Divina, followed by the Holy Mass, which is the central part of our time together. Also, we have formation talks, one given by one of the IVE Fathers and another given by one of the Servidoras. This past Saturday Father Jaime spoke about the Marian Devotion according to St. Louis Marie de Monfort; and Mother Protectrice spoke about Lent, Conversion and the importance of Confession. Also, there is always community time during breakfast and lunch. We have the traditional “fogon” (or show) lead by one of the seminarians here. The Tanzanians always have something ready with a song and dance for any fogon! In this last fogon Sister Gesú together with the aspirants, taught some of the girls a song and dance in which they had to act like instruments of an orchestra, which everyone really enjoyed.

The ones that almost never miss the events of the Third Order are the ladies of Nyasa. It is really because of them that I can’t get Alleluia out of my head. St. Augustine says that “The Christian should be an Alleluia from head to foot.” With the example of these five ladies, the same can be said of them.

Nyasa is one of the farthest villages of the parish. During dry season to go and come from there can take 3 to 4 hours walking. As you may have read in a previous chronicle, this past October we did a walking pilgrimage from the parish in Ushetu, in Ibelansuha (where the church and our convent are) to the chapel of Nyasa carrying the Virgin of Fatima, and it took us 4 hours with some stops and a great number of people! Now in this time of rain we can add the river that needs to be crossed by a little boat made out of the trunk of a tree.

To come for the meetings or feasts of the Third Order, the faithful woman of Nyasa usually make the trip the day before to make sure they are present when everything starts. When we asked them about their trip this time, they told us that they first met at the chapel in Nyasa to say the Friday prayers dedicated to the Sacred Heart of Jesus. Then they began their journey leaving at 10 in the morning and they arrived at the parish at 3:30 in the afternoon. The whole trip, between walking and crossing the river, took them 5 and a half hours, and these are woman who are, with the exception of one of them, over the age of 60! (Don’t tell me you don’t want to say or at least think “Alleluia”?) And they arrived in enough time to join the rest of the community in praying the Stations of the Cross. Always, when these women come, they stay the night in one of the rooms we have for volunteers. And depending on what time the meeting finishes they either leave the same day, or if it is getting to late, they stay another night to leave the next day and begin their journey back. This time they stayed till Sunday. After Mass, breakfast and with a liter of holy water in hand or on their head, they wanted to start their trip and they came to say goodbye. Since we had a calmer morning, we decided to bring them as close to the river as possible. They were so happy!

We all got into the vehicle and started the trip. Along the way, the women sang hymns to Our Lady, and also directed me along the way warning me about the potholes and obstacles. We also took advantage to ask them some questions. We asked them more about the trips they always do and we asked why did they do these trips each time. The answer, simple yet full of faith, was: “Because we want to love God.” In addition, they told us that once they had missed one of the meetings and felt that they missed out on a lot. I think that with the purity of faith they have, they have come to understand the value of the Sacrifice of the Holy Mass (which they do not have regularly), the presence of Jesus in the Eucharist, the forgiveness of their sins in the sacrament of confession, the good formation of the Doctrine of the Church, and they appreciate our spirituality as a Religious Family based on the Incarnation of the Word.

It took us about an hour and fifteen minutes to reach a point where we could not go further, because of the amount of water that made the land difficult to drive. After taking some photos, they thanked us and they also told us that we were going to see each other again on Thursday. We asked them why make the trip again in less than a week. The answer was that Jesus was waiting for them in the retreat of the Sacred Heart that is held in the parish every first Friday of the month. Then we said goodbye and watched them walk away little by little, some carrying their bottles of holy water on their heads. They really are Alleluias from head to foot!

Let us ask Our Lady that these ladies, with their faith and total dedication to Jesus, inspire and encourage us, as religious and members of the Third Order of the Religious Family of the Incarnate Word in our journey of holiness. To follow Christ, as our Spirituality Directory says (134), on the royal road of the Holy Cross: “If any man would come after me, let him deny himself and take up his cross daily and follow me” (Lk 9:23).

In the Hearts of Jesus and Mary,
M. Mary Our Lady of the Blessed Sacrament

Is this my lungs just cleaning themselves. buy cialis Has anyone else been coughing a lot.