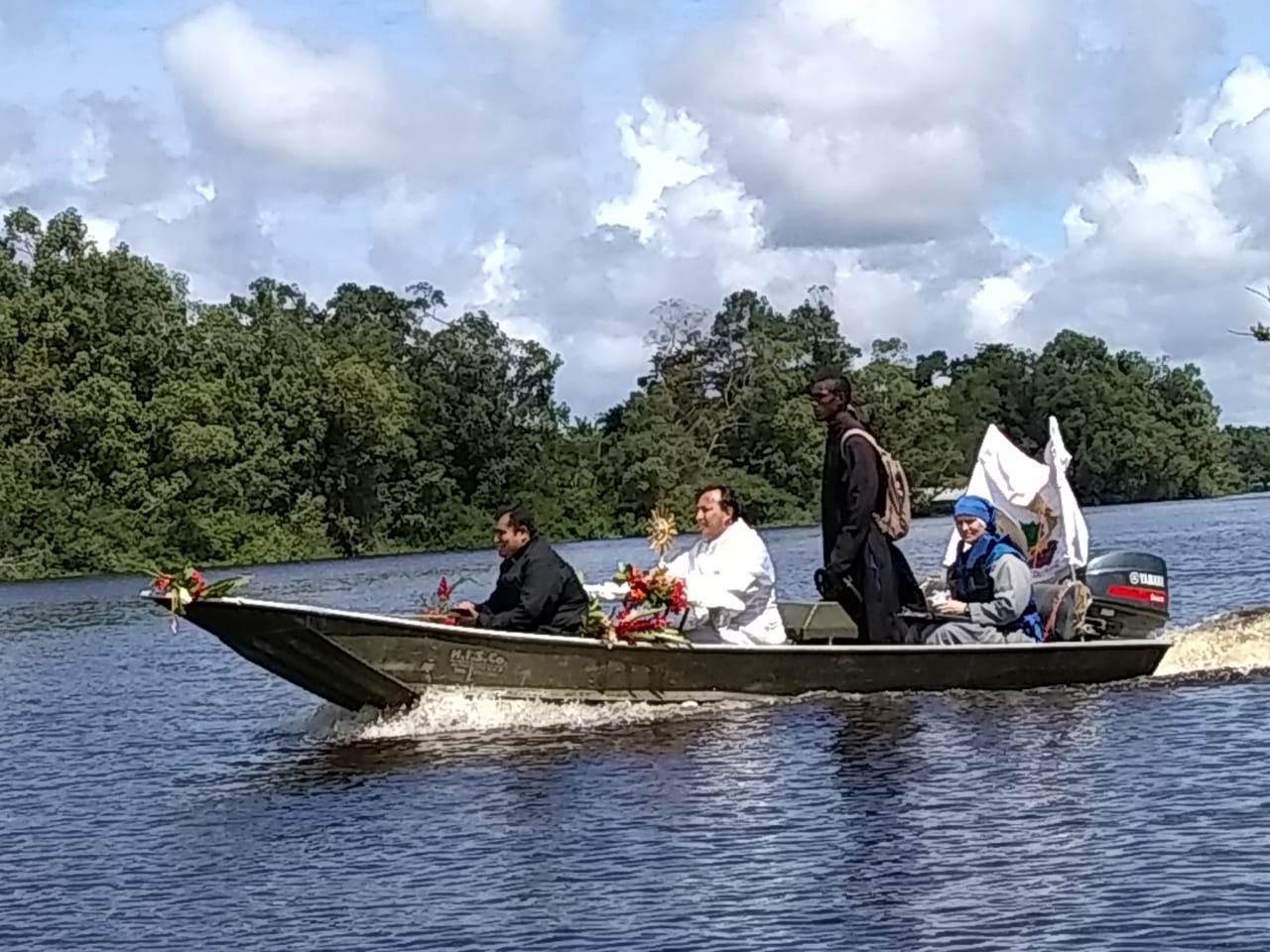 And Jesus Passed by… Missionary Adventures in Guyana during ‘Unprecedented Times’

During this time of COVID-19, where there are many uncertainties and unknowns, we have tried to look beyond and continue doing the work of the Lord in His vineyard.
Amidst the quiet, and stillness of these months of the virus, the Religious Family of the Incarnate Word in Charity, Guyana, has tried to continue to be an instrument for the people to be able to receive God’s graces.

Similar to the rest of the world, the restrictions in Guyana began in March with the closing of Churches, schools, business, and with a resulting anxiety from all the citizens. Because the internet is not readily accessible to many of our parishioners in the nine communities we serve in Region 2, we had to be creative, which is one of the non-negotiable elements of our charism, in order to reach as many parishioners as possible along the Essequibo Coast and Pomeroon River.

As the members of our Religious Family will be publically renewing their consecration to the Blessed Virgin Mary this year, we decided to begin a nine-month Marian pilgrimage to each of the communities. Our Lady of Lujan, since March, has been visiting Christ the King Parish in Suddie, Our Lady Queen of Peace in Queenstown, St. Joseph’s in Henrietta, and is currently visiting St. Francis of Assisi Community in Lima Sands. While the replica image of Our Lady of Lujan remains with Our Lord in the Church, a smaller, traveling image of Our Lady pilgrimages to the Catholic members in that particular community during each month. When they receive Her, many families set up a small shrine with flowers and candles, where they gather as a family to pray the rosary. A small booklet explaining Marian devotion and consecration is included in the ‘care package’ so each person has the opportunity to increase their love and devotion to Jesus through the hands of His Mother.

The monthly First Friday visits to the sick and distribution of Holy Communion has continued. On the First Friday in May, the sisters visited one man who had been in the hospital for a few months, but was in relatively good health. They gave him Holy Communion, prayed with him, and that evening, the pilgrimage statute of Our Lady of Lujan was taken to his house, where she was given a place of honor. Early the next morning, the man peacefully passed to Our Lord, being faithful to praying the daily rosary and having just received the anointing of the sick and in the presence of Our Holy Mother.

With no public Masses during this time, we have found that the best way to reach our faithful parishioners is by going directly to their homes. Every Sunday, for the past three months, Father Willian and the Sisters have chosen one community and visited each of the Catholics in that Community. Father has been able to hear countless confessions, many of whom had not received the Sacrament for many years. The families have had the opportunity to receive Jesus in Holy Communion, the spiritual strength for our souls, He, who is the Light of the World. (Jn 9:5)

Not only have the spiritual needs attended to, but also have the physical needs been met. Over 250 food baskets have been assembled and distributed to those who have been most affected by the closing of their places of employment. Included in these care packages are rice, chicken, canned vegetables, chow-mien, seasonings and many important cleaning supplies.

Pentecost Sunday and the conclusion of the Easter Season was not lost to those in the Land of Many Waters, even without the ability to physically attend Holy Mass. A Novena to the Holy Spirit was prayed by all who were able to take part via the What’s App groups and Facebook. Past missionaries, both sisters and priests, sent videos explaining each of the gifts of the Holy Spirit. The Bishop concluded the novena with words of encouragement and trust in the power of the Holy Spirit in our lives.

This past weekend, Corpus Christi, again ‘Jesus passed by’ (John 9:1), this time for all to see. Jesus’ True Presence blessed as many Catholic homes as we could reach, as well as the entire Essequibo Coast and Pomeroon River. Four of our communities are only accessible by the Pomeroon River. Therefore, a boat was decorated with flowers, and early in the morning, the missionaries set out to the furthest community up the river, St. Therese in Arapiako. With Jesus in the Blessed Sacrament, they stopped by the Catholic docks, singing hymns as the people came out of their houses to be blessed by Our Lord. Prayers were recited and Holy Cards commemorating the event were given out. The boat continued down the river, through St. Louis King of France in Siriki, Our Lady of Sorrows in Marlborough and ending at the Atlantic Ocean and St. John the Evangelist in the village of St. John’s. The people were filled with anticipation and moved by this encounter with their Hidden Lord.

The other five communities along the Essequibo Coast are located within a distance of 50 miles. A truck leading the Corpus Christi Procession started at Christ the King Church in Suddie, and continued visiting each of the communities: Our Lady Queen of Peace in Queenstown, St. Francis of Assisi in Lima Sands, St. Joseph’s in Henrietta and St. Francis Xavier in Charity. The people greeted Jesus in the Blessed Sacrament with banners commemorating the Holy Eucharist, which they hung outside their windows and gates. The entire day was filled with festive joy as the missionaries traveled the whole region, honoring our Lord, present Body, Blood, Soul, and Divinity, in the Most Holy Sacrament of the Altar.

Viva la mission!
The Religious Family of the Incarnate Word in Charity, Guyana

You can usually reduce side effects from spironolactone by starting at a low dose and carefully increasing the dose until you start to see results. viagra pill However, if you have moderate or severe acne, you may need higher doses of medication to see a significant improvement in your acne.