IVE Father Johntin Lokang, recently wrote this chronicle about his work in the plains, jungles, and villages of Tanzania. To learn more about our work in this country, famous for its savannas and wildlife, read on – and while you do, please offer a prayer for our missionaries!

In our parish of Ushetu, we have 46 chapels. In this chronicle, I would like to tell you about a visit to one of them, in order to give you an idea of the work of the Institute of the Incarnate Word in Tanzania.

It takes some five days to reach the village of Mwendakulima (signifying “cultivated zone”). This village is not one of the most distant, but it has the unique feature of having to ford a river that, in this time of the year, is very high. In this condition, I left on the “piki-piki” (motorcycle) and came to the river after a half-hour trip. Like usual, there were waiting there on the shore some men with small canoes, which they use to perform the passage. They charge 2,000 shillings for this, which comes out to a little more than a dollar. With them, the catechist, Peter, was waiting for me as well. After some difficulties in raising the motorcycle onto the little raft (it is large, weighty motorcycle)… we began the navigation. As you can see in the photos, the raft was not that much above the waterline! Thanks be to God, it was not a very long distance, and, once on the other side, we continued the trip for another hour on the piki-piki.

In this village, they were expecting me to celebrate Palm Sunday, but not until the following day. After a traditional, and very hospitable, reception, dinner with the catechist and some others, we went to sleep.

There is a very humble chapel in this village, and therefore everything was prepared outside for the ceremony. The participation of five other villages, which took advantage of the opportunity to come, necessitated this circumstance, since many of them only receive a priest to visit three or four times a year, if they are fortunate. In this way, more than 150 persons were present – they could not fit in the small thatch and adobe chapel. Catholics from the neighboring villages of Celeli, Tumbo, Makondeko, Miluli, and Nyaza all came up for the Mass. Before the time for the Mass, I heard confessions for nearly an hour.

The Palm Sunday Mass was truly beautiful, with a special blessing for the palms, cut for the occasion. As is their custom, the villagers filled the Mass with very jubilant songs. Following the Mass, there was a lunch for all the persons present, that was made possible thanks to the generosity of “leader” of the Kigango (the chapel), who, in this case, is a woman named “Modesty.” To clarify, the leaders of each chapel are chosen by the vote of the faithful and keep their position for three years. This woman also gave 500,000 shillings (around 250 dollars, a good quantity of money for the people of these lands) for the construction of a new chapel.

Finally, after the lunch, I took the catechist to see the sick, something that is part of every visit. This time there were four, each of whom received the Sacraments of Christ and were truly thankful for the visit, as the houses in these places are very far apart. But there was no time to stay and talk – we had to return to the parish, knowing that that return meant re-crossing the river…. I was able to share another meal with the catechist, Peter, who accompanied me again the following day to the rivershore. The villagers candidly enjoy hosting a priest, and it brings them much happiness to have one with them one day, every three or four months.

One of these past nights, speaking with Father Diego (the other IVE missionary priest stationed in Tanzania) about this, we were reflecting that we ought to consider how many times we have the assistance of the priest; how we have the Mass every Sunday and even every day… and how many times we do not value the Mass sufficiently!

God bless you! Pray for our mission. 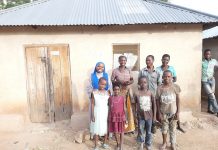 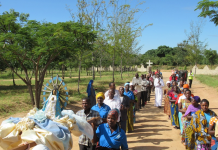 Steadfast in the breach – Tanzania mission

Toil overcomes all things, toil in the sweat of the brow – Tanzania 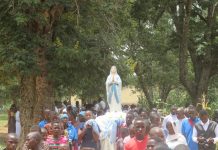