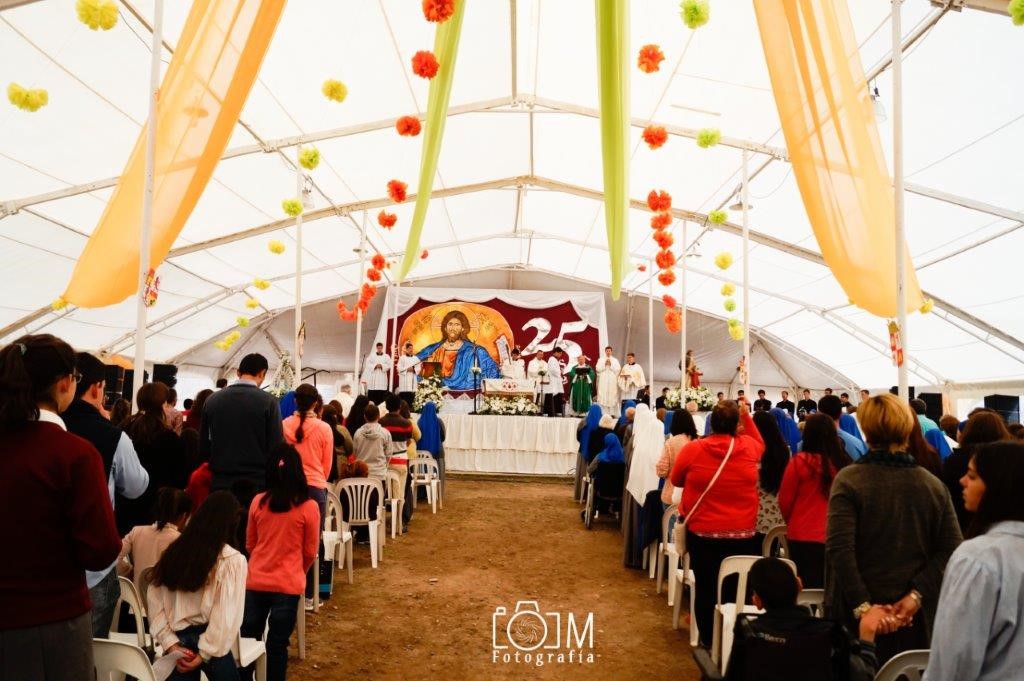 Christ reigns in the Isabelle the Catholic School!

A short while ago we sent a chronicle describing the ceremony held for the 25th anniversary of the school, Isabel la Católica.  Now we would like to tell you about the familial celebration with which God graced us on Sunday, together with so many fruits and blessings.  With great joy and humility we can say that Christ reigned on this day thanks to the participation of the members of this large family.

The day began with the final preparations in expectation of the civil, educational and religious authorities, as well as the families of our alumni, friends, benefactors and all the members of the Religious Family of the Incarnate Word of the Province of Argentina: priests, seminarians, sisters from Saint Catherine, novices, postulants, aspirants and our beloved children, youth and elderly from our homes.  In attendance there was also a delegation of those families who began the school Isabel la Católica in Vila Mercedes. Everyone was ready to enjoy a day full of thanksgiving for all of the benefits we have received.  The members of the school, parents, youth from the upper class, teachers and children helped with various activities: rice with chicken for 1600 people, parking, arranging chairs and so much more… the members of the various commissions were ready  for their particular area of service, for example: the commission for the liturgy, sacristy, beverages, service and kitchen, red cross, the Isabel la Católica, contest, family games, marathon, videos of the life of the school, historical displays, etc.

The Mass began at 11:00 am with the presence of Monsignor Eduardo María Taussig.  The Major Seminary, Mary, Mother of the Incarnate Word, and the sisters of the “Saint Mary of Cleophas” community were in charge of the liturgy.  The Saint Cecilia choir accompanied us, adorning the liturgy beautifully.  The readings and the psalm were delegated to the teachers of the Institute, as well as the gifts for the offertory.  We would like to highlight the lovely flower arrangements prepared by one of our teachers and her family.  After communion we consecrated the School to Saint Joseph, together with all of the families and individuals present.  We give special thanks to St. Joseph who has filled us with blessings during this year, and who has made it possible for us to cover all of the costs of these celebrations.

After Mass, the video of the history of our school was shown, with photos of the beginnings, and key moments in the life of our institution such as the first day of class in 1992, the opening of the upper grades, the construction of the buildings, the camps, floral games, Thomistic studies, mission trip for the fifth grade girls, etc.  They also showed interviews with children, youth, teachers, families and alumni who shared their love for what has been their second home and family.  It was moving to see so many alumni who are religious in various parts of the world, sending their greetings and prayers.  While the people enjoyed the video, the parents of the school arranged the tables and chairs for lunch.  The high school girls, with the help of the art teachers, set the tables, each with their respective flower arrangement.

At 1:00 pm we began to serve the rice with chicken, which was a fruit of the generous and joyful work of more than 60 people who had cut the vegetables and prepared all of the ingredients for each skillet the day before, and of the 40 men who had cooked it that morning.  The blessing took place took place immediately, making way for the entertainment, which was directed by the sisters in charge of the school, and a few of our alumni.  There was a wide variety of talent on display: there were songs, dances, and recitations.  Participants included children from the initial, primary, secondary and upper levels, parents, seminarians, sisters, novices and postulants, aspirants and the unmissable children from our homes.  It was a moment of great joy and recreation.

After the lunch and the show, at 3:00 the sporting event par excellence began.  The marathon at the Saint Joseph campus was run with the condition that it must be completed by the family, holding hands.  Many families participated with great effort and success.  Simultaneously the family games took place, as well as the three soccer matches of the parents, teachers and seminarians.  All won their prizes and the corresponding medals.

Arriving to the end of the day, the family St. Joseph procession took place at the new grounds named after him.  This was a historic moment, since for the first time we had a procession on the roads that have recently been marked out in the Saint Joseph Campus.  The rosary was recited amid cheers and songs to Our Lady and our protector, St. Joseph.  Everything ended in the rotunda of the school where the families who began school in 1992 offered a plaque in thanksgiving for the 25 years.  It was inscribed: “May Christ reign in everyone and in all things.” It was blessed by Father Martin Juillerat.  As the crowning touch to the day, the children from the initial level, together with their teachers and families, let go a rosary of blue and white balloons which rose toward the sky with all of the intentions of those present.  We ended with a song to our Mother, the Virgin Mary, the moving hymn to Our Lady of Fatima, asking for the grace to be faithful to the many blessings we have received.

All glory to God!  All for Jesus through Mary.