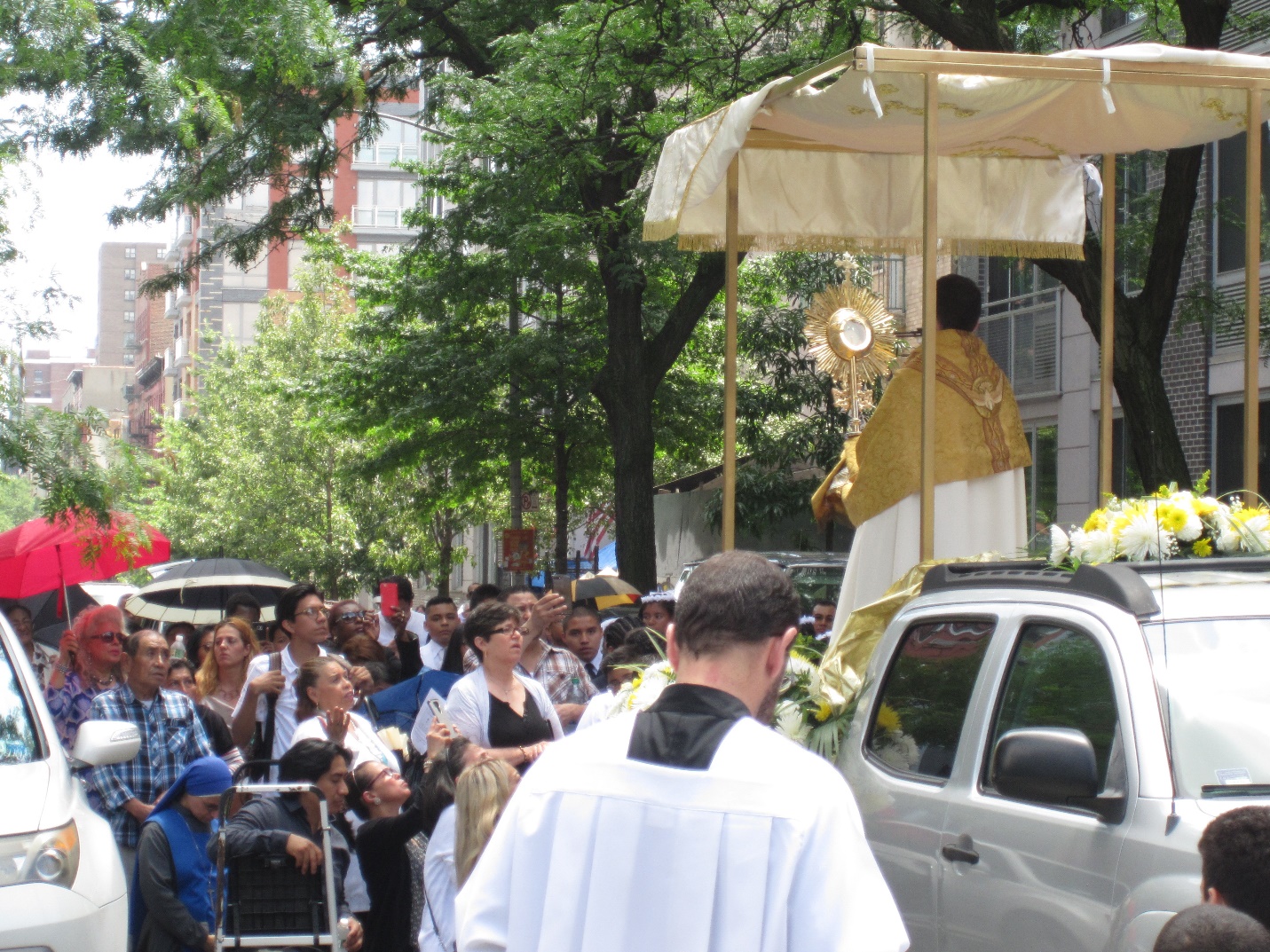 “The devout participation of the faithful in the Eucharistic procession on the Solemnity of the Body and Blood of Christ is a grace from the Lord which yearly brings joy to those who take part in it.”[1] These words from our spiritual father, Pope St. John Paul II, should serve to stimulate us to celebrate Corpus Christi wherever and whenever possible with a solemn procession in accord with that tradition which was firmly rooted even in the 12th century.[2] This practice has continued to be recommended by the Church in order that “the Christian people [might] give public witness of faith and devotion towards the sacrament.”[3] To commemorate the Solemnity of the Body and Blood of Jesus Christ, the parish of St. Paul took to the streets and manifested to all of Harlem its great devotion to the Most Holy Sacrament of the Altar with a procession through the neighborhood. This year’s procession coincided with the reception of the First Communion of many children (109 in total) from the parish’s catechism program who also took part. Parading the Blessed Sacrament through the streets of Harlem might cause concern for a lack of respect towards the Sacramental Species, but such fears were largely unfounded as many passersby spontaneously displayed their reverence for the Eucharist. Some even prostrated themselves as the Our Lord went by.

It is true that organizing and carrying out a procession such as this takes a considerable amount of time and effort of many different individuals. Acquiring permission from the city, preparing the monument, organizing the children, leading the prayers and songs, and the printing of booklets, all entail a great deal of sacrifice. But anything which is worth doing is worth suffering for. In this way, the parish confesses not just with its lips the primacy of the Eucharist but with its very deeds. The primacy of the Eucharist in our faith cannot remain a mere abstract affirmation but must truly manifest itself at every opportunity available. To claim that Jesus is sacramentally present in the Eucharist, then to claim that the Church is missionary by her very nature,[4] and to claim that in the Church’s evangelization of the peoples Christ must be brought to them,[5] only to keep Our Eucharistic Lord stored away within the walls of our churches is simply contradictory. At times Christ must be taken out of the church building so as to lead the people back into the Church where they can adore Him.

St. Mother Teresa of Calcutta expressed her belief in the apostolic value of Eucharistic adoration and its immense power to change entire societies when she said, “People ask me: ‘What will convert America and save the world?’  My answer is prayer.  What we need is for every parish to come before Jesus in the Blessed Sacrament in holy hours of prayer.”[6] In addressing the superior generals of men’s religious orders, St. John Paul reinforced the role of prayer and adoration in apostolic endeavors when he reminded them that “a pause for true adoration has greater value and spiritual fruit than the most intense activity, were it apostolic activity itself.”[7] Not only do these manifestations of our faith in the Real Presence bring others to Him, but they also serve to build up the faith of those who participate in them. As St. John Paul II wrote, “Faith is strengthened when it is given to others.”[8] When the parish community gives this faith to the people outside the parish, the parish itself will grow in love for Emmanuel, God among us in the Blessed Sacrament.[9] “The worship of the Eucharist outside of the Mass is of inestimable value for the life of the Church.”[10]

Hence the Magisterium makes the stimulation of Eucharistic devotion an obligation of priests who have been charged with looking after souls: “It is the responsibility of the pastors to encourage, also by their personal witness, the practice of Eucharistic adoration and exposition of the Blessed Sacrament in particular, as well as prayer of adoration before Christ present under the Eucharistic species.”[11] This was stated earlier by Blessed Pope Paul VI who exhorted the priests and bishops to promote love for the Eucharist amongst the faithful above all other devotions: “We beseech you to foster devotion to the Eucharist, which should be the focal point and goal of all other forms of devotion.”[12] St. Alphonsus explains why priority must be given to the Eucharistic devotion when he writes, “Of all devotions, that of adoring Jesus in the Blessed Sacrament is the greatest after the sacraments, the one dearest to God and the one most helpful to us.”[13] However, there could be some who complain that the devotion to the Eucharist doesn’t fit in their schedule. A holy hour takes a whole 60 minutes after all! Or perhaps they argue that the reverent celebration of the daily Mass is sufficient. Despite this human objection, The Congregation of the Clergy expects it to be made a priority of all priests in order to prevent their ministry from becoming sterile: “Spending time in intimate conversation with and adoration of the Good Shepherd, present in the Most Blessed Sacrament of the Altar is a pastoral priority far superior to any other…Every priest should attend to this priority so as to ensure that he does not become spiritually barren nor transformed into a dry channel no longer capable of offering anything to anyone.”[14] This is nothing more than a practical application of Jesus’ words, “Without Me, you can do nothing” (Jn 15:5).

Although the fruits of this devotion will only be known to us fully in heaven, there are times, such as the Corpus Christi Procession at St. Paul’s, when Our Lord deigns to manifest some of the positive effects of a devotion to His Eucharistic Presence. Apart from the graces proper to a particular procession, St. John Paul referred to every Corpus Christi procession as a grace which “yearly brings joy to those who take part in it.”[15] Therefore, let us give thanks to God for the blessings received from this year’s procession asking that they might continue to bear fruit in all those who benefited from it. May Our Lady obtain for us the grace to adore Our Lord present in the Sacramental Species as she did when she participated in the Mass of St. John the Evangelist.