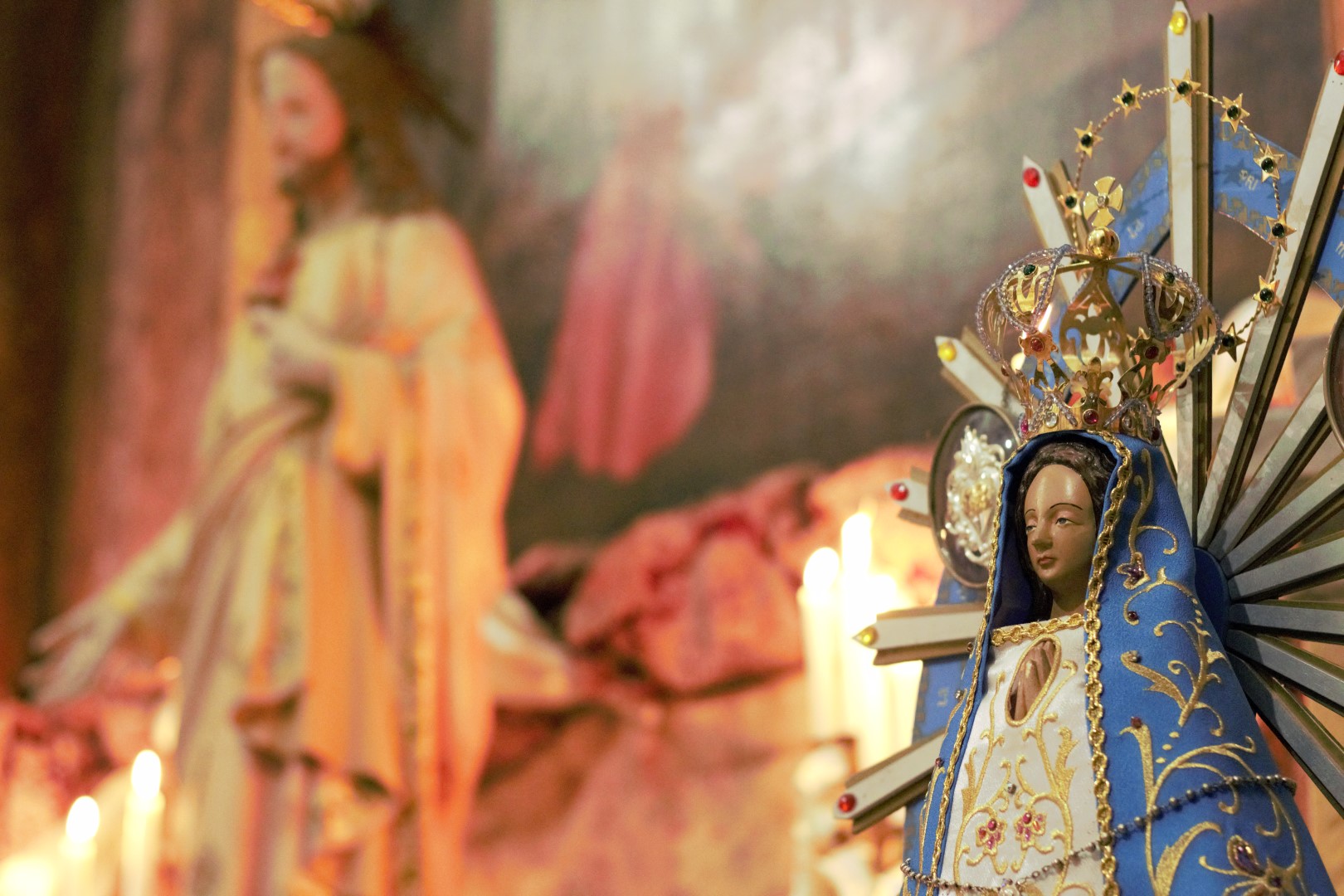 As happens about once every six years or so, this year Mother’s Day falls on May 8th, a fitting tribute to the greatest of all mothers and, in particular, the one who is the Mother of our religious family.[1]

In every Marian apparition or miracle, some aspect of her maternal affection for us shines forth, just as a diamond reflects the light in different ways as we turn it in our hands. In apparitions where Mary speaks, this care shines forth in her words, the way she speaks, and even in the language she uses. For instance, who could fail to see Mary’s motherly love at La Salette, when, upon seeing that the visionaries, two uneducated peasant children, didn’t understand her French, she said, “Ah, my children, you don’t understand me; I will speak differently,” and then repeated her words in their local dialect. Or her maternal compassion at Lourdes, where Our Lady spoke to Saint Bernadette almost exclusively in her Lourdes dialect, as Bernadette proudly notes,[2] and displayed such warmth and such affection for the sickly and long-suffering Bernadette that the phrase, “she smiled at me,” appears almost as a refrain in her accounts of the apparitions.

Yet, Mary’s maternal affection is seen perhaps even more clearly when she doesn’t speak, not because her words get in the way, but because silence has a way of calling our attention to what would otherwise pass unnoticed. A mother may tell her child a thousand times a day that she loves him, and we don’t doubt her, but we are overwhelmed by her love as she silently keeps vigil over her child when he is sick or asleep. Mary’s silence always has a particular eloquence of its own, because that silence is an echo of Calvary where she, the silent Mother of the Word Incarnate, became our mother in that marvelous exchange: “Woman, behold your son” (Jn 19:26). We can apply to her the words of Psalm 19: “No speech, no word, no voice is heard, yet her sound extends through all the earth, her words to the utmost bounds of the world” (v. 4-5). Her silence speaks to us of all her love, all her affection, and all the graces won for us as she “received her wounds in the house of her beloved.”[3]

Sometimes that silence lasts for just a brief moment; such was the case at Knock, when Our Lady and her companions appeared and disappeared all the while hidden under the cloak of silence. In such cases, the silence lives on in the memory of that appearance. Yet, at times, Mary deigns to leave an ever-present reminder, an image of her silence that continues to speak, and such is the case of Luján.

A mother’s love is uncomplicated, unconditional, and overwhelmingly simple. We’d be hard pressed to find a simpler miracle than the one at Luján. God’s providence sent two statues down the path by the river, but our Lady chose one to remain there.[4] It’s as though the Queen of Heaven simply laid her finger on the cart and said, “This far, and no farther. Here I stay with my children.” That’s all. And from the banks of that river her image continues to silently remind us of her overwhelming love, affection, and concern for us as individuals, but especially as religious of the Incarnate Word family, who were born under her mantle and continue to seek shelter there, despite whatever storms or trials might arise. In silence she intercedes for us, and even in silence can obtain what we need, as the story is told of Saint Gemma Galgani. In ecstasy she begged Jesus for the grace of conversion for a sinner, which He refused. She appealed to His sacrifice on Calvary, to His mercy, to His charity . . . nothing; finally, Gemma threatened, “Jesus, I’ll ask your Mom. Imagine saying no to your mom.” To that, Jesus replied, “If that’s the case, then I cannot refuse.” Sure enough, the sinner arrived within the hour, and made his confession. “No speech, no word, no voice is heard, yet her sound extends through all the earth, her words to the utmost bounds of the world,” even into the depths of her Son’s Sacred Heart. Every trial and difficulty is an opportunity to run and trust Our Lady’s love even more, the occasion to make our own the plea of the Ave Maris Stella: Monstra te esse matrem, Show yourself to be a mother.

In her writings about the apparitions at Lourdes, Bernadette, almost in passing, makes the following note: “I noticed that Our Blessed Lady would often look over my head to single out individuals in the crowd. She would then smile on them as though they were old familiar friends.”  Let us ask for the grace, for all of us, especially for those who tomorrow will consecrate themselves to Mary, to always turn to Mary in our needs so that at the end of our lives, she might lead us as “old familiar friends” and beloved sons and daughters past the veil of silence to join with her in the eternal hymn of praise in heaven.

[1] This good night was originally given in 2016, when Mothers’ Day in the United States fell on the 8th.

[2] Cf. M. Estrade’s The Appearances of the Blessed Virgin Mary at the Grotto of Lourdes (Kent, UK: Burns Oates and Washbourne Limited, 1912), 246: “One day when she was talking with us, I said to her, ‘Tell me, Bernadette, did the Lady of the Grotto speak to you in French or in patois?’ ‘Oh, patois.’ ‘Bah! Do you mean to say that a lady of such lofty rank knows patois?’ ‘Yes.’ Then she added proudly, ‘And it was the Lourdes patois which she spoke.’” There was only one exception: “The parish priest told Bernadette to ask the lady her name; at the last apparition, the lady folded her hands and said, ‘I am the Immaculate Conception.’ On previous occasions, the lady had spoken with Bernadette in her native patois, or dialect, but when asked her name, she replied in proper French. Bernadette did not understand the words, and had to keep repeating them to herself as she went to tell the priest” (Ann Ball, Modern Saints: Their Lives and Faces (Charlotte, NC: TAN Books, 2011), 73).