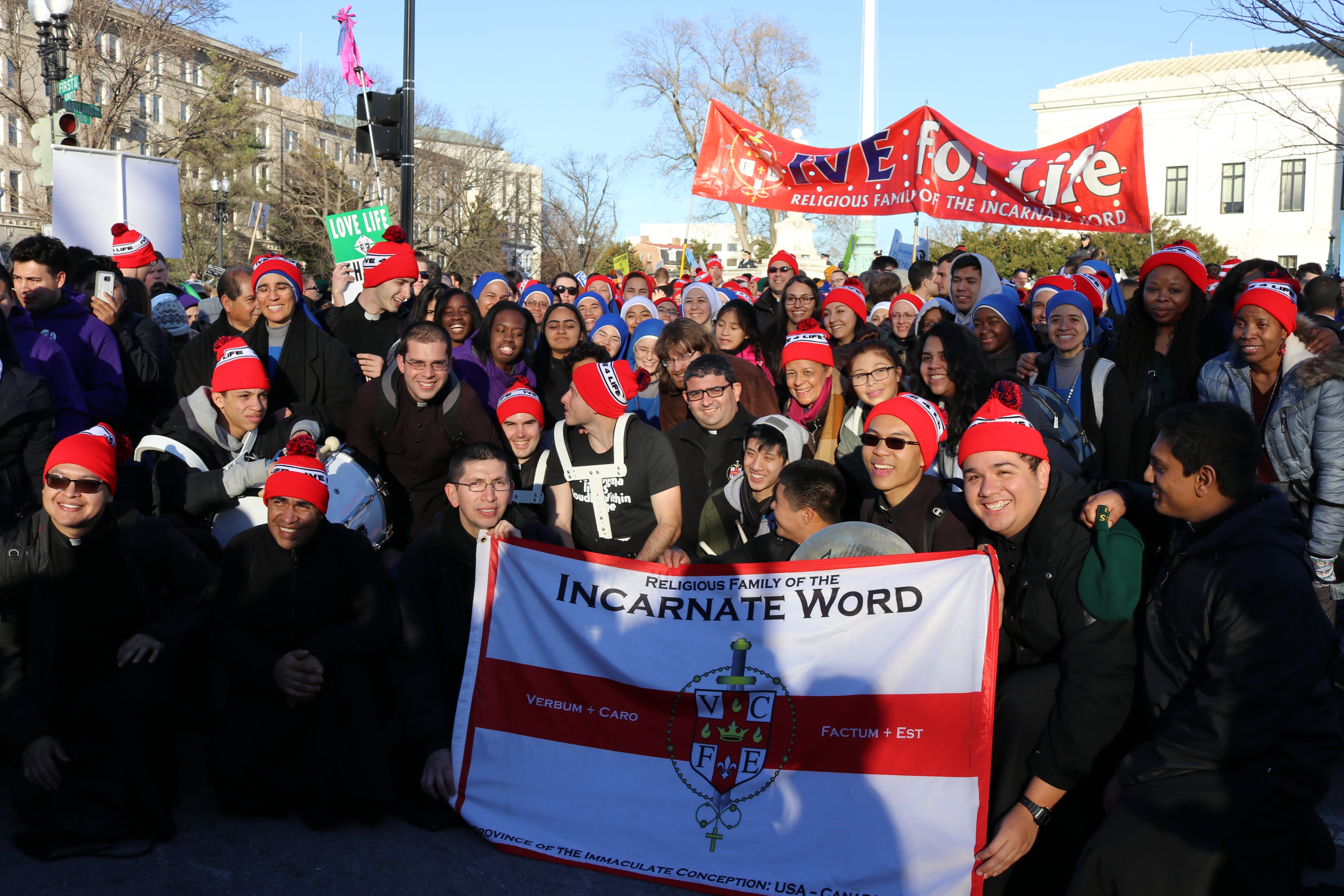 The Gift of Life and Youth Celebrated in DC

As I sit down to write this chronicle it’s Monday afternoon, January 22nd, the 45th Anniversary of the infamous Roe v. Wade Supreme Court decision that brought infamy to our nation: the “right” to abortion. That means it’s “March for Life Weekend” minus one. Echoes of “Ole, ole, ole, Pro-Life, ole!” still resound in my ears. Images of crowds, whether they be filling the National Basilica for the Vigil Mass for Life or marching down Constitution Ave towards the Supreme Court Building or packing the parish hall at St. John Baptist de la Salle for the Winter Youth Festival, flash through my memory. And still today, that strange “Indian summer”[1] as some call it around here in Washington, DC, lingers in the air. It’s the day after March for Life Weekend here at the seminary, and oh, what a weekend it was!

Everything began on Thursday evening with the Religious Family’s participation in the National Vigil for Life at the Basilica Shrine of the Immaculate Conception. We joined thousands of other Catholic faithful (cardinals, bishops, priests, seminarians, religious, and laity) in a solemn Mass imploring God’s help in our pursuit for the defense of life. His Eminence Timothy Cardinal Dolan was the main celebrant and homilist at the Mass, reminding us that the civil rights issue of our time is the right to life, and that this fight for life is not only political, but first and foremost spiritual.

On the following day, Friday, the Religious Family and youth groups from both the DC area and other parishes in the Province (Brooklyn, NY; Bridgeport, CT; Wauchula, FL and Philadelphia and Avondale, PA) met at St. John Baptist de la Salle for the “pre-March” events. First among them was a presentation by Dr. Maria del Pilar Calvas, a medical doctor specializing in Human Genetics who trained under Servant of God Dr. Jerome Lejeune. Dr. Calvas spoke about the holiness and the work of Dr. Lejeune, the impact it had on her life and conversion, and how we can demonstrate that human life begins at conception. Both her presence and her presentation was truly a gift of Providence. After Dr. Calvas’ presentation we celebrated our own Mass for Life before heading to downtown Washington to participate in the annual March for Life. Given the unusually warm weather for mid-January, we found ourselves amid a larger-than-ever crowd of young and old (mostly young) from all over the United States. Our Religious Family may have been just one more group among thousands of others, but as expected, we were certainly one of the loudest among them. With drums, cymbals, megaphones, and ready voices we not only sang and shouted in defense of life, but we also gave witness to the joy of having it.

Even though the March ended on Friday, our weekend was still only just beginning. Saturday brought with it the annual Winter Youth Fest. Over 300 youth joined us for a day filled with competitions and sports, excellent talks given by Gregory Stearns, Mike and Annie McHugh, and Amy Ambrose, Holy Mass, Adoration and confessions, a candlelit Rosary Procession, and as always, a fogon[2]. The closing Mass for the Winter Youth Fest was held the following morning, Sunday, at the St. John Paul II National Shrine. The Mass was extra special this year, not only because it was our first time having it at the JPII Shrine, but also because it included the Rite of Investiture of one the IVE novices, Miguel Castro. Like Dr. Calva’s presence on Friday, Miguel’s receiving the habit at the closing Mass, was another gift of Divine Providence, since it gave witness to the youth of the mysterious joy and fulfillment that comes from consecrating one’s entire life to God. After the Mass we were all treated to a thoughtful and inspiring talk by Sister Gaudia Skass, OLM, who spoke to us about the secret to holiness in the lives of St. John Paul II and St. Faustina and how this secret lies in the message of Divine Mercy. After the talk we also had the chance to visit the exhibit of the life of St. John Paul II and to pray at the reliquary chapel housing the first-class relic of St. John Paul II’s blood.

Looking back, I can truly say, I’ve never been happier to be so tired on a Monday. And speaking for all of us here in the Province of the Immaculate Conception, I can honestly say as well, that this year’s March for Life and Winter Youth Fest were blessed by God in a very special way, and that we are only beginning to see the fruits of our labors. May God continue to bring about the growth!

[1] “Indian summer” is a period of unseasonably warm, dry weather. It usually applies to the autumn, but some also attribute it to warm weather in the winter.