On May 8th, it became public news in the Diocese of Eichstätt that the Bishop has commended the care of a Marian Sanctuary called Mariahilf (Mary our Help), which celebrates its patronal feast day on March 25, to the IVE.

The current church (built between 1718-27) is of a modestly ornate Baroque style and the image of our Lady venerated there was painted by the famous artist Lucas Cranach the Elder. The sanctuary has been previously entrusted to the care of Cappuchins, Carmelites, and Redemptorists before us.

For now, we will continue living in the diocesan seminary to continue studying German which, as you know, is no walk in the park. God willing, we’ll move to the sanctuary in September, and I (P. Martin Villagran) will be the Rector of the church, while P. William Duraney will help as Parrochial Vicar in a nearby parish. The Bishop’s plan is for us to have a time and place for our community life and our particular apostolates, but that we also have contact with the people of Neumarkt (population ca. 39,000), which lies at the foot of the hill on top of which the sanctuary is built (as you can see in the pictures).

We know that in both the sanctuary and the parish there is a good participation of the faithful at Sunday Mass and also a decent attendance at the sacrament of Confession. This compels us even more to learn the language, even though most of the people there speak one of the three or four German dialects to be found in this diocese.

Once we arrive at the front lines of our mission, we’ll be able to give more and more detailed news. For now, this little information is hopefully enough to guide you in your continued prayers for the mission of the IVE in these parts.

Here’s a link to the announcement in the Neumarkt newspaper (in German, natürlich).

Institute of the Incarnate Word, IVE. 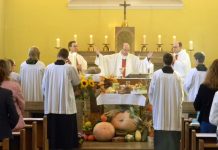 A Brief Update from Germany 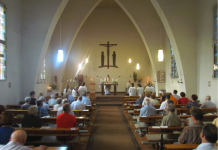