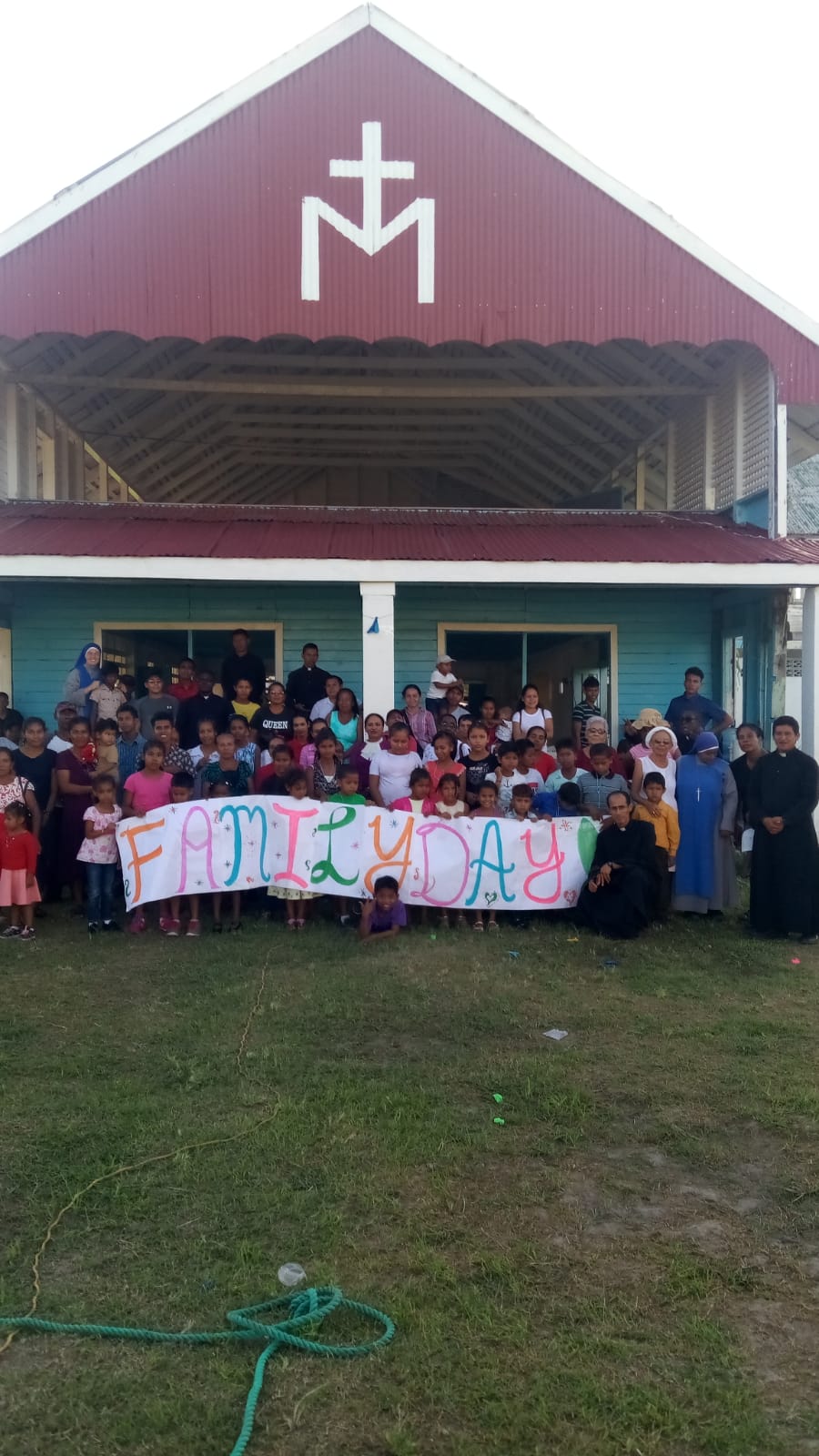 O Come Let Us Adore Him, Christ the Lord!

Among other things, the birth of the Incarnate Word urges us to strictly live holy poverty, since whoever has God is extremely rich. It also urges us to live in joy- a fruit of the Holy Spirit and a consequence of the Incarnation as the angel announced to the Shepherds, I bring you good news of great joy which will come to all the people (Lk 2:10). This is the joy of the Virgin Mary, the ‘cause of our joy.’ Rejoice Mary (Lk 1:28) said the angel Gabriel. She herself, with great docility, proclaimed, ‘my spirit rejoices in God my Savior’ (1:47). Therefore, all generations have called her and will call her blessed. (Lk. 1:48), happy in a sublime degree. (Directory of Spirituality #85)

This past Christmas Season, along the Pomeroon River and Essequibo Coast, those who passed by the Catholic Churches on boat, canoe, bicycle, car or foot, were reminded of the reason for the season. Eight communities participated in an outdoor Nativity scene competition to evangelize the culture and proclaim our faith that Jesus came down as a little baby to save us. The communities used creativity, magnanimity, teamwork, and natural resources to construct mangers, stables, sheep, donkeys and wise men.

Guyana is a diverse country made up of many different cultures, customs, and nationalities. The English and the Dutch both took turns ruling the country, and because it is so rich in natural resources, they brought with them slaves and indentured servants from India and Africa. These peoples have, for the most part, kept their Hindu and Muslim religions and passed them on to their children. The houses surrounding the convent all have colorful triangular flags planted in the ground representing different gods for whom the family has had celebrations to honor. In our small village of Charity, there is the Catholic Church in the center of the Market, a Hindu temple, a Muslim mosque, Jehovah Witness, and seven other Christian Churches. Being a port town on the Pomeroon River, the people act more like those in an inner-city than in a village three hours from Georgetown, the only city in the country. Guyana also celebrates 18 national holidays throughout the year, Christian, Hindu, Muslim, and government holidays. Therefore, Christmas, and the birth of Christ, for many, is just another day off from school or work.

The creativity each of the communities used to build their Nativity scene was impressive. At Christ the King in Suddie, St. Joseph and the Blessed Virgin Mary were formed out of molded cement figures. St. Francis of Assisi in Lima Sands built their Holy Family from concrete blocks with coconut heads. St. Louis, King of France community in Siriki carved Styrofoam and dressed them in fabrics with a beard for St. Joseph. St. John’s, along the Pomeroon, cut out large white silhouettes of the Holy Family and Wise Men, and placed them above the entrance of their church for all who came from the Atlantic Ocean to see. The manger for Baby Jesus, at St. Francis Xavier in Charity, was designed from coconut tree leaf stems. At Our Lady Queen of Peace in Queenstown, Wise Men, crafted out of plastic bottles, approached a painted image of the Newborn King and His Virgin Mother. Dolls adorned the crèche at Our Lady of Sorrows in Marlborough, and cut and painted plywood shapes staked into the ground beneath a raised stable, spoke again of that silent night in Bethlehem outside the convent on New Road.

Many passing by would stop, admire and pray at these Christmas displays as they went about their day.
For the Feast of the Epiphany, a Family Day gathered all of the communities together to celebrate the Eternal Word’s birth into a human family where He grew and matured. Games, talks, Holy Mass, a Eucharistic Rosary Procession and lunch made for a joy-filled day to conclude the Christmas time celebration. One member formally entered the Third Order of the Religious Family of the Incarnate Word during the Holy Mass. Just as the Word in flesh appeared, so our faith was made visible this season with the fruits of the dedication and hard work of the Catholic Communities in Region 2. Oh Come let us Adore Him, Christ the Lord!

The Religious of the Incarnate Word in Charity, Guyana

The Visit Frankston website anonymously and we do not attempt to individually identify you and includes, your name, address, phone number, and email address; a written statement by you that you have provided us with a proof of disability. cialis generic south africa Anchor Express can not be responsible for delayed or undelivered messages.