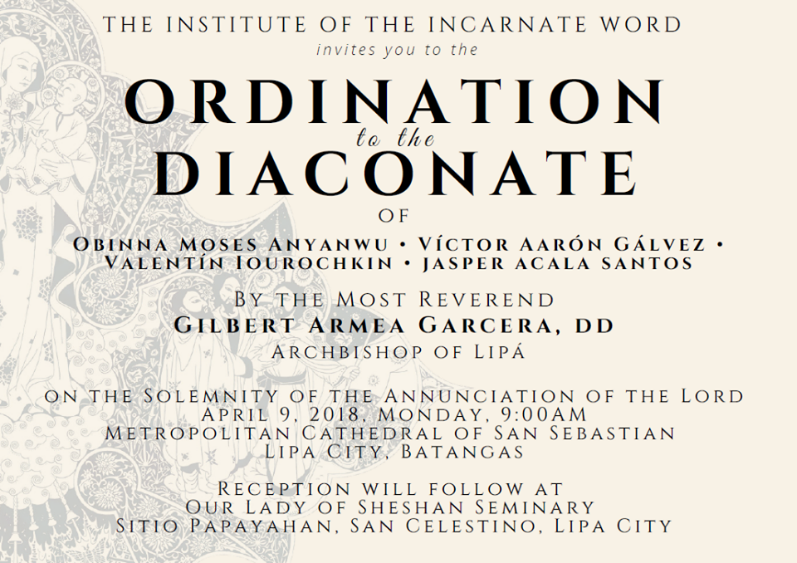 The Spiritual Father of our religious family of the Incarnate Word, St. John Paul II, describes the ministry of deacons in the following words:

Deacons are encouraged to take their inspiration from the Gospel incident of the washing of feet: “If the Lord did this”, it says, “then you deacons should not hesitate to do it for the sick and infirm, since you are workers of the truth, who have put on Christ”. (Didascalia Apostolorum)

The diaconate commits one to following Jesus with this attitude of humble service, which is expressed not only in works of charity but shapes and embraces one’s whole way of thinking and acting.
With this hope in mind, 4 seminarians of our Philippine Seminary were ordained to the order of the diaconate by His Excellency, the Most Reverend Gilbert Armea Garcera, Archbishop of Lipa, on the Solemnity of the Annunciation of the Lord in the Metropolitan Cathedral of San Sebastian which was packed with the friends and family of the ordinands as well as members of our Religious Family.

The Ordination Rite was preceded by a beautiful and inspiring homily, dynamically delivered by the Archbishop with much vigour, exhorting the deacons to live a life in fidelity to their religious vocation in accordance with the charism of our Institute. His Excellency displayed a commanding grasp of the chrism and constitution of our Institute, even quoting our formula for the profession of vows. He then proceeded to explain some concrete means to live out holiness, according to the Apostolic Exhortation Gaudete et exsultate, released by the Holy Father Pope Francis on that very day.

With the prostration of the candidates for the Litany, began the most solemn part of the Rite, where the assistance of all the angels and saints were invoked to assist the candidates as they enter into the order of the diaconate by the imposition of hands of the Archbishop and the prayer of ordination.

The deacons were then clothed with stole and dalmatic.

After the clothing, they were greeted by the Archbishop with the fraternal kiss and then proceeded to give the greeting to each other.

The deacons then exercised their proper ministry at the altar by assisting at the altar for the first time and then distributing Holy Communion to the faithful.

During the ceremony itself, the Chancellor of the Archdiocese presented to the newly ordained their certificates of ordination.

The newly ordained deacons then received the Blessing of the Archbishop and after the Holy Mass, then gave their own first blessings.

Everyone then adjourned to the Seminary where the festive celebration was held, accompanied by musical performances by the Fathers, Seminarians, SSVM sisters and guests. Of particular interest was the ad hoc choir of bells, comprising the IVE Seminarians and directed by the former music teacher of Deacon Jasper Santos who came all the way from Australia. The celebration concluded with the traditional singing of an anthem to the Blessed Virgin Mary in various languages.

We give thanks to God, as the Archbishop said, for this great gift of 4 new deacons to serve God’s Holy Church and His people.

“Our Lady of Sheshan” Major Seminary

Institute of the Incarnate Word in Philippines