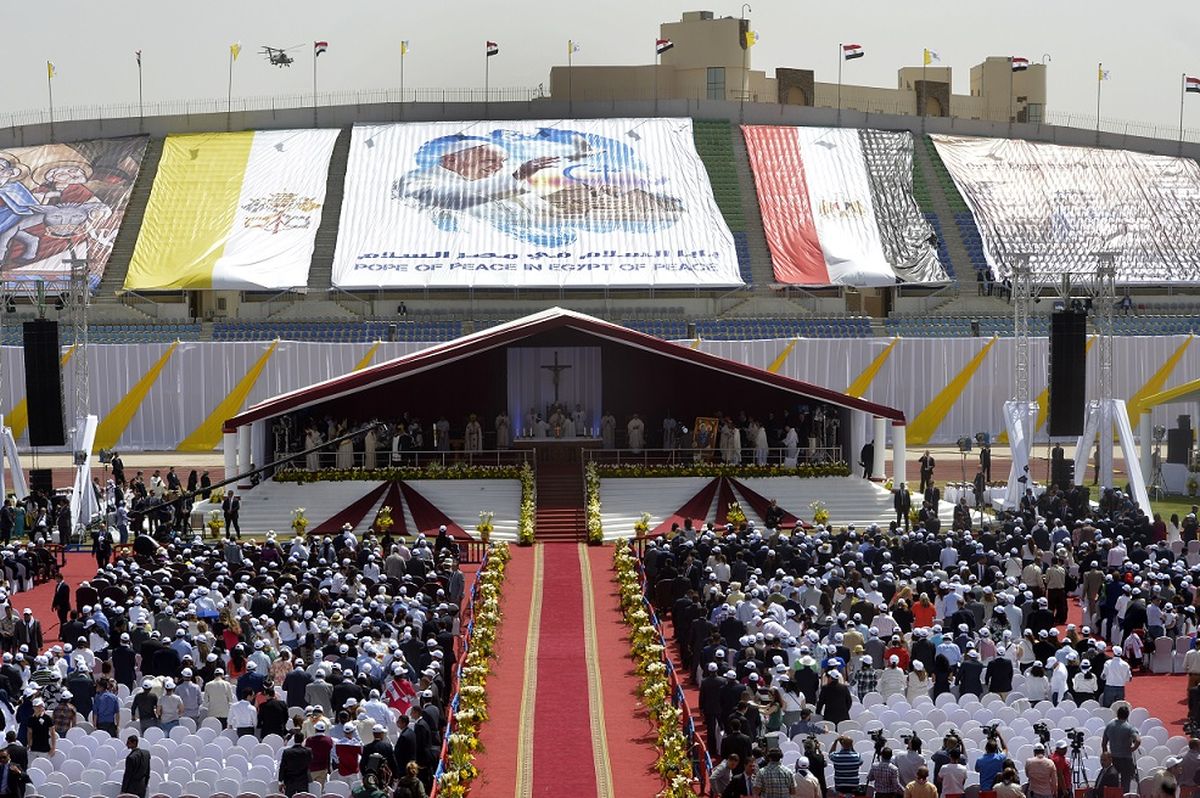 Dear All in the Incarnate Word:

First of all, Happy “dia del Cristo de la Quebrada” and the 36th anniversary of the moment that Father Buela received the foundational grace!  Best wishes to all and may Our Lord and the Blessed Virgin grant that we may always persevere with fidelity and joy.

How good and merciful God has been, and continues to be with us, from that moment in which we were conceived for religious life!  To Him all the glory!

We are in Egypt.  We continue with a particular joy, and with a serenity that is rare in the frantic life of Cairo and Alexandria.

A historic event, in my opinion.

After the terrible attacks against the Christian community of Egypt that took the lives of – and gifted us with – dozens of innocent Coptic martyrs, Pope Francis decided not to cancel his visit to Egypt.  This visit had been planned long before.  To tell the truth, there was fear about what could happen to him, to all the Christians, and the consequences that would follow everywhere.  The blood that had been shed on Palm Sunday of this year was still fresh!  Less than a month had passed since then.

If anything had happened, it would have been terrible.  Not only because of the essential of the  possible results: the offense against God and His Messiah, and the danger of perdition for those who would commit such grave crimes, but also because it would have been the downfall of Egypt as a country; foreign relations would have crumbled, as well as the “diminutive” Catholic presence here. Yet, thanks be to God, none of this took place, and for this reason almost everyone here is very serene and content, simply because the apostolic visit of the Holy Father was successful.  It was a historic event, not only because it repeated the visit of the successor of St. Peter to the so called successor of St. Mark, as St. John Paul II had done, but because of the very difficult circumstances at the national, regional and world-wide levels in which this visit took place.

There were thousands and thousands of people who took care of everything that was necessary, from the logistics of the faithful for the celebrations to the security at all the levels.  Worthy of notice were the labor of the military, the special forces, police, etc.  Their vast operation was impressive and efficient.  We also remember that most of them are not Christian and they carried out their work  in a professional and very respectful way.  It was moving to see the Christians, for example, especially after the celebrations, passing beside the security forces and thanking them as though they had been the hosts of the events and a type of “heros”.  It was very good.  Deo gratias! Even so, the fact that this was a historic success does not mean that all of the problems of Egypt; of the Middle East; the theme of interreligious dialogue; the full acknowledgement by the orthodox of catholic baptism; civil and religious rights for Christians and in particular for catholics, foreign relations, peace, etc. etc. etc. is all good.  What is certain is that the trip, the messages, the gestures, the peace lived during these days, and the common declarations, among other things, gave the inhabitants of this beautiful country a clear sign that peace and co-existence are possible when they are desired in an efficacious way, and this was evident.  It showed also that the Christian presence is an essential and very beneficial part of the life of this noble nation.

Almost all of our own who live in Egypt, including the people in our care, were able to participate in the two main events accessible to all.  The Holy Father’s entire trip lasted about 26 hours.

He had very fruitful encounters with the President of the Republic, with the Orthodox Coptic Patriarch Tawadros II and with the great Iman El Azhar, as well as meetings with the bishops, the Catholic Coptic Patriarch, priests, religious and lay people. On Saturday morning there was Holy Mass in the military stadium of Cairo, and afterwards, and encounter with religious in the Catholic Coptic seminary of Egypt.  Father Jorge Hernandez had the opportunity to participate in the ecumenical prayer encounter the day before.  He was going to translate the message of the Pope, which was in Spanish as well as the following prayer, but since the beginning of the ceremony was delayed by two and a half hours, they cut the speeches, and when Fr. Jorge was going to translate the – finally – short greeting of the Holy Father, they told him not to.  It was a pity that the Holy Father could not give the speech he had planned, and poor Fr. Jorge had spent many days carefully preparing himself to give a simultaneous translation of the Spanish into Classic Arabic.  The practice will be of service to him for some other occasion!  In fact, we spent the time translating.  Deo gratias!

To end this chronicle, I would like to tell you something very beautiful that happened to me on the afternoon of last Saturday, April 29th.

We were preparing for the encounter with the religious.  We were literally cooking under the sun, little by little, but like a fire!  Fine, I go to look for a bit of water, and at this moment I heard them call various priests by name – I didn’t know a single one -.  I returned to the place they had assigned me for the superiors of congregations and asked the girl in charge of our section if there had been any other indication.  She checked, and as the provincial superior I had to be in committee to welcome Pope Francis when he arrived for the encounter with the religious. She took me through various checkpoints, convincing the guards, who knew that she was one of the ones in charge, that I had to be with the other provincial superiors.  We were few.  The provincial of the Franciscans, the Jesuits, the Combonianos, and IVE.

I had barely settled myself in the reception área, when Pope Francis entered the seminary, and when he got to me I introduced myself and kissed his hand: “I am of the IVE Holy Father, I am the new provincial in the Middle East.”  Then the Holy Father said to me: “That’s great!  I want to thank you for all that you do, for all the good you do.  Where there are difficulties, where there are problems, you go and put yourselves to work.  Very good!  This is worth a great deal!”

I said to him: “pray for our missions, I especially ask you…” and going close to his ear I asked him for a couple of very important missions with a few difficulties.  I was surprised because he began to converse with me, asking me more about what I had asked him, and other related issues.

He was very happy with what we are doing and he told me happily, making a gesture that we should continue forward, “You already had your general chapter.  That’s good.”(¡Está todo bien!”.)

I asked him again to pray for us and told him that we pray very much for him and I thanked him for his words.

I had barely finished speaking with him when they gave me a commemorative medal of his apostolic visit to Egypt like the one that is in the photograph.

It is beautiful news.! We continue to pray always for the Holy Father and for each and every one of our brothers and sisters in the Incarnate Word.

Provincial of the Middle East and Africa

Today the apostolic vicar of His Holiness for Egypt, Mons. Adel Zaki, celebrated Holy Mass, offereing it for our founder, Fr. Carlos Buela, and for the priests, religious and lay members of the Religious family of the Incarnate Word in the Middle East.