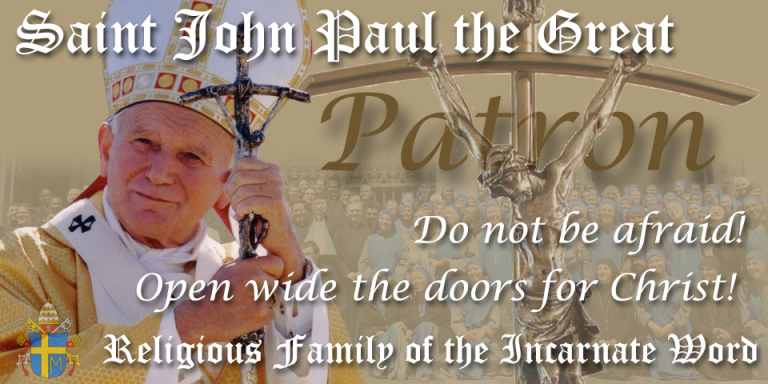 Feast of Saint John Paul the Great, Father of the Religious Family

Presentation of the Project: May Jesus Reign Through Mary!

You can visit the channel and find the video in the different languages of the places where our Religious Family has missions.

The novices received the holy cassock, and a group of religious made their first vows.

Anniversary of the school that has him as their patron…

Inauguration and Blessing of the Pastoral Center in Philippines

First Vows of the Novices in Orvieto, Italy

Rosary for the Missions in Ulyanovsk, Russia

Closing of the Parish Mission in Tunisia

Apostolate in the South of the Mission, Tanzania

Talk on the Cross for the Voces Verbi Group of Ukraine, by Father Marcelo Lattancio ]

Catholic Culture Course in Peru: “The Role of the Father in the Sanctity of his Children”

Popular Mission with the Youth from the Parish of Saint Joseph of Anchieta, Brazil

Inauguration of the Monument for the Veterans and the Fallen in the Malvinas at the Saint Michael the Archangel Baccalaureate, Santiago del Estero, Argentina

Feast of the Chapel of Our Lady of the “Bon Voyage”, San Rafael, Argentina

Recreational Activities in the IVE Novitiate in Ukraine

Spiritual Exercises in Ecuador and Sepphoris

Prayer for Peace in Iraq

Volunteers from Holland in Albania

Baptisms in the Don Bosco Oratory, in the City of La Plata, Argentina

Meeting of Voces Verbi in Ukraine

About Saint John Paul the Great (In Spanish)

Getting to Know the Servidoras (In Spanish)