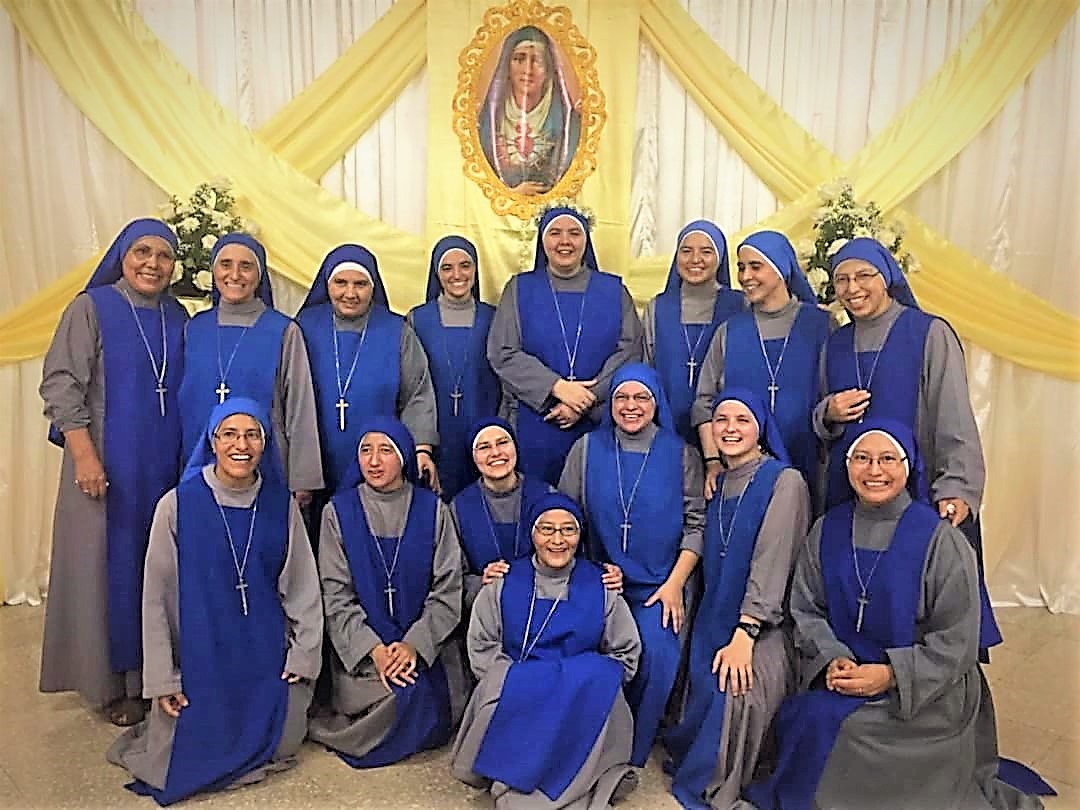 By the grace of God, this past February 23rd, Sister María de los Siete Dolores (Mary of the Seven Sorrows), missionary in Aleppo, Syria, made her perpetual vows of poverty, chastity and obedience, and the fourth vow proper to our Religious Family, that of marian slavery.

The Holy Mass was celebrated in Ecuador in the Home of Mercy under the care of the Sisters, Servants of the Lord and the Virgin of Matara, the feminine branch of the Religious Family of the Incarnate Word, and was presided by Fr. Florencio Gerry, an IVE missionary in that country…

The Monks of the Monastery of El Pueyo go on Pilgrimage to Leyre and Navarra, Spain

Procession of the Divine Child in the Parish of Our Lady of Lujan, Philippines

Convivencia of the Seminarians in Brazil

18 Servidoras entered the Monastery in Tuscania, Italy, on the Feast of the Chair of St. Peter

The Feast of Blessed Ludovica de Angelis, Patroness of one of the Communities of the Servidoras in La Plata

I could tell you about various visits to some villages this past week, but I would like to begin by telling you that the woman, Maria, aged 90, who “revived in order to receive the sacraments”, passed away one week after the Mass I told you about in the previous chronicle…

Iceland: Preparation for a Good Confession and Receiving Jesus in the Eucharist

Visit to the Monastery of Saint Menas in Alexandria, Egypt

Monday February 25th, Fr. Enrique González, IVE, the Novice, Gerges and the Coadjutor Brothers Micheal and Iohanna, together with the handicapped boys, went on pilgrimage to the Monastery of Saint Menas (also spelled Minas), in the outskirts of Alexandria.

Saint Menas (In Arabic called Mar Mina) was an Egyptian martyr of the III and IV centuries; in the place of his martyrdom they built a monastery that was destroyed after the Muslim conquest, but was nevertheless rebuilt, and today the monastery of Saint Menas is one of the most famous monasteries in Egypt.  Relics of the saint can be found there.

Feast of the “Saint Jacinta” Aspirancy in Paraguay

This past Wednesday, February 20th, the aspirants in Paraguay celebrated the feast of their patroness, Jacinta Marto.  They went on an outing and in the evening celebrated with the sisters of the community of Caacupé.  In order to continue the festivities, on Saturday 2 aspirants recounted the life of Saint Jacinta, the little shepherdess who offered many sacrifices for the conversion of sinners.  That day they also welcomed the new bedel, Sister María Lirio de San José (Mary, Lily of Saint Joseph)

Cyprus, A few Photos of Activities in the Parish

Activities with the Children

Pilgrimage to the Shrine of Saint Joseph, Philippines

Parish of Saint Joseph of Anchieta, 5th Anniversary of the Group of Third Order Men

A New Meeting of the Third Order in Aleppo

Servidoras in Ecuador, Pilgrimage to Cuenca and the Shrine of “La Virgen del Rocio” (Our Lady of the Dew)

An Excellent Game of Soccer

Ongoing Formation in the Missions in the Holy Land and Egypt

Old Cairo (or historic Cairo – in Arabic Masr al-Qadima) is located to the south of the city and is the oldest part of the city, enriched by the passing of time, and by the people who lived there.  Among the different civilizations that passed through this historic place are the Pharoahs, the Greeks, Romans, Byzantines, Arabs and Otomans…

Beginning of the Year in the Classical Secondary School Alfredo Bufano, San Rafael

The students who began their first year of the Secondary level had a talk about the local history and geography, made a visit to the ruins of the fort of San Rafael, and went to the tomb of Alfredo Bufano where they prayed for the soul of their patron and offered the year of study that is beginning.

Visiting the Cathedral of Orvieto

Outing with the Youth of the Parish, Russia

Participation in the Biblical Program, Ukraine

Testimony of Forgiveness and Mercy, Novitiate of the Servidoras in the USA

Some of our sisters had the opportunity to attend a beautiful talk about the forgiveness and mercy of Immaculee Ilibagiza, a survivor of the Genocide in Rwanda in 1994

Arrival of New Missionaries to Spain

The Progress of the Children at School

Outing to the Children’s Republic in La Plata

The sisters of the community of Jesus Crucified in La Plata tell us: Yesterday we were able to go on a little outing with the oldest children to the “Children’s Republic” in La Plata.  Everything was lived in a climate of great joy and entertainment.

Welcome in the Our Lady of Guadalupe House of Mercy in Alexandria, Egypt

New Web Page of the IVE in Germany

Open House in the Minor Seminary in the USA

School Tools Campaign for the Children of the Homes of Mercy, San Rafael

Invitation to the IVE Meeting