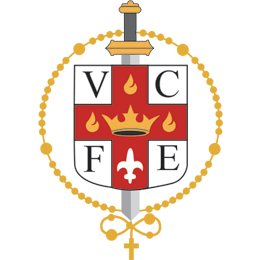 Institute of the Incarnate Word (IVE)
Home “Immaculate Conception” province USA The Story of Our Lady of Lujan, and “a Chasuble”
Facebook
Twitter
Google+
Pinterest
WhatsApp 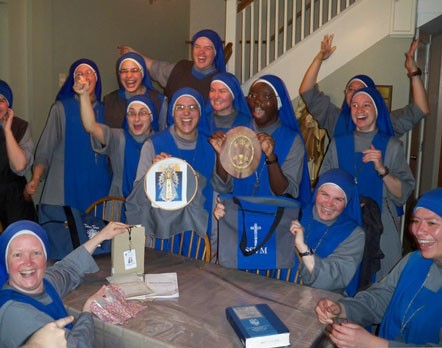 Every year, from January until the ordinations at the end of May, our convent in Washington is buzzing with preparations for the chasubles of our brothers in the Institute of the Incarnate Word, soon to be ordained priests.

Working with the requests of the transitional deacons, we select fabrics, color themes, and images. There is the chasuble itself, ready to be sewn. Then there were the embroidered images to prepare.  These take a long time to embroider; we usually work on them during our community time at the end of meals. In the spring of 2015, we were working hard on two pieces designed for Fr. William Duraney’s chasuble, following his specifications.

First, for the back panel of the chasuble we were preparing an embroidered image of the Sacred Wounds of Christ.  The image would be surrounded with two texts: the Hebrew text of Isaiah, “By his wounds we were healed”; and another in Latin, “Behold Your Son” (both a Marian trope and a reference to the sacrifice of the Son to the Father daily upon the Altar).

Secondly, we embroidered an image of Our Lady of Lujan with the IVE shield on her mantle, prepared to be transferred later on to a separate background, on which we would then embroider the rays. The work was progressing well, and by the beginning of May, we had almost finished.

During a trip, I had taken both finished images of Our Lady and of the Sacred Wounds with me to finalize the work of “framing” them with the gold edging needed before placing them on the chasuble.

Returning to Washington, my travelling companion and I joined the rest of the Religious Family at the IVE Seminary for Holy Hour and First Vespers of the Vigil of Our Lady of Lujan, May 7th.  During the service, while nearly 100 religious were gathered inside the church in prayer, a group of thieves started breaking into the small cars with bags in the back seats, which were clearly distinct from the large vans of the religious (none of those vehicles were touched).  A priest passing though the parking lot frightened the thieves, who promptly dropped the bags they had in hand and drove off with what they had already stashed in their car. From the broken backseat window, I looked into the car and began to piece together what was still there…and what was missing.  We realized that the embroidery was gone!

Our “treasure” had been stolen!  Something of no use to thieves, but impossible to replicate in the three weeks left before the ordinations!

After the police report was filed, we began to drive around the neighborhood checking dumpsters and the edge of the road for any discarded ransacked bags.  Our thought was that maybe the thieves had taken what they wanted and gotten rid of the evidence close by. We also prayed fervently to Our Lady, reminding her that this was HER FEAST DAY!  If there was any time to display her strength, this was it.

That night, before sung Compline, our mother superior invited the sisters to ask in a special way for Our Lady to see to the restoration of these sacred images destined for the Holy Mass.

We all prayed, remembering the early traditions of Our Lady of Lujan from 17th century Argentina. According to these traditions, she used to be found with dew and bits of grass on her mantle in the mornings due to miraculous nighttime visits she liked to make to the surrounding villages.

“Come home, dear Lady!”  “Maybe someone will leave her on our doorstep!”  “Maybe they will furtively return her to the Seminary!” The following morning, May 8th, the actual feast day of Our Lady of Lujan, we received a phone call from the Provincial House.  A man had called, reporting that he might have something that was ours.  In fact, he had been leaving phone messages since the night before on one of our sister’s work numbers for the Archdiocese.

Immediately we prepared to go to the address, bringing two seminarians with us as back up: Whose house were we going to? What would we find?  Would the embroidered images be there?

Once we got there, we found out the story: the man who called us had gone out to walk his dog after dinner and found a number of bags strewn on his lawn.  He picked them up and started checking for ID.  He found a sister’s badge from the Pastoral Center, which had her photo, her name and the office number on it.  He also looked up our convent on-line and called the Provincial House.  All of this happened within 30 minutes of the robbery.

As we thanked him and took the various small bags out to the car, our excitement was hard to contain!  The embroidery bag was among the ones returned (a number of bags were never recovered)…I looked inside…YES!  Our Lady of Lujan was there!  YES!  The Sacred Wounds of Christ were there!  However, they had kept my scissors…and all the faux golden lace for the borders!  What humor in this detail…keep the gold for good measure, but do not have the other theft on one’s head! Returning to the convent, we were ecstatic.  All the sisters gathered at the door as we presented our trophy: Our Lady of Lujan had come home! All the pieces were there (even the rare German festschrift of Anglo-Saxon studies on loan from another library, which I was very concerned about as well!) She came home!  And we “were like men dreaming” because it is not every day that one recovers stolen goods…let alone such goods as these in such a timely show of divine intervention. So, we finished the chasuble in time, along with the stole. And with great ceremony made the presentation to the deacon…for this had been no ordinary project! And a week later, he was ordained to the priesthood, and Our Lady of Lujan who had come home was there as a new priest was born in the Church to serve the people of God as an alter Christus. May Our Lady of Lujan, Patroness of our Religious Family and Mother of our Vocations, pray for us!

Laus Deo Matrique! (“Praise to God and to His Mother!”)