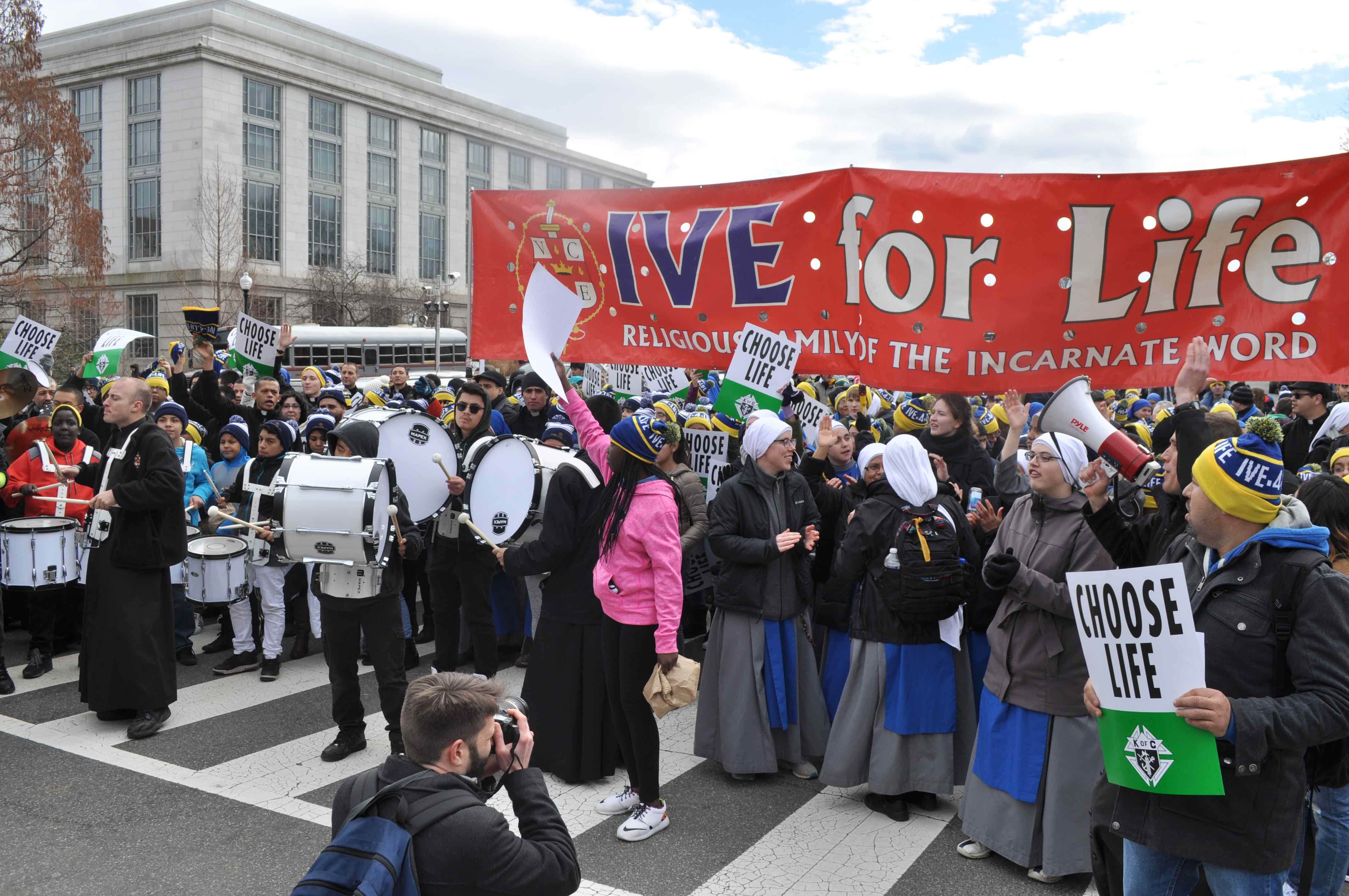 Blessed Pier Giorgio Frassati, the great model for Catholic youth, once wrote to a friend saying,

“We who by the grace of God are Catholics must steel ourselves for the battle we shall        certainly have to fight to fulfill our program and to give our country… happier days and a      morally healthy society.”

His words invoke the same sentiments among our Religious Family in the United States every January. Forty-four years ago abortion was legalized in this country on January 22nd, and for 43 years following, faithful Christians of this country have taken to the streets of our nation’s capital on the anniversary, to make their claim for “happier days and a morally healthy society.” For more than two decades we have joined in the March for Life to take up our share in the fight for life. Each year’s March is different. Last year the perfect winter storm hit Washington the day of the March. Many people had to suddenly cancel their travel plans.  Crowd sizes at the Vigil for Life, at many of the Masses for Life, and at the March itself were greatly subdued.  Enthusiasm for celebrating life seemed like a flickering flame in the wind of social causes.

This year, however, all was ablaze. Due to a historic Presidential election just a few months prior, in which the right to life took center stage in many political discussions, and due to the historic presence of Vice President Mike Pence at the Rally for Life, this year’s March garnered new enthusiasm. As the Vice President himself said at the rally, “Life is winning in America.” That spirit of coming victory was felt on many levels. It could be seen in the massive turnout for this year’s March. It could be heard in the spirit of joy shared among the marchers as they cheered and celebrated the gift of life. It could be felt in the spirit of brotherhood as we walked shoulder to shoulder in one common effort. But as we know, our true hope does not come from politics alone, but in the living God. We must give thanks above all to Him, for the success of this year’s March. In a particular way, we as a Religious Family give thanks to Him for allowing us to bear witness to the Gospel of life along with the rest of our archdiocese at the Vigil for Life on the Thursday evening prior to the March at the Basilica Shrine of the Immaculate Conception. There, all of our priests and seminarians, and many of the sisters participated in the Mass along with thousands of other Catholics.

We give thanks to Him for the opportunity to organize our own Mass for Life on the morning of the March at St. John Baptist de la Salle Church. The Mass was presided over by our provincial superior, Fr. Alberto Barattero and concelebrated by many of our priests in Washington. One of those concelebrants, Fr. Nathaniel Dreyer, in his homily, asked us to consider the true value of life.

We give thanks as well, for the many youth and families who joined us after the Mass to take part in the March itself. Our “little” group of about 300 joined the more than 600,000 participants at this year’s March. With a full drum corps we took to the streets of DC, not only to show our support for the dignity of life and the necessity of change in our nation’s laws, but also to manifest the joy of having life and of having it in abundance in and through Jesus Christ.

Our thanksgiving, however, does not end with the March for Life, since on the following day, Saturday January 28th, around 275 youth converged on the seminary campus to participate in the annual Winter Youth Fest. The glory certainly must go to God for the success of this event as well. The day began with a Mass in honor of Mary, Mother of Life, and was followed by breakfast and the day’s first talk given by Fr. Daniel Vitz, IVE on the topic of Confirmation. The midday and afternoon activities consisted of time for sports, lunch and workshop sessions. The workshop sessions focused on a variety of topics to help form the youth in being responsible and virtuous young Catholics. William and Anya, two psychology clinicians from Virginia, talked to the youth and answered their questions regarding “Emotional Maturity”. Mrs. Maria Hamm, from the Archdiocese of Washington, gave a talk on “The Truth about Gender”. Fr. Luke Joseph Leighton, CFR, spoke to the young men in the latter part of the afternoon about how to live a life of purity by fighting against temptations and having recourse to God’s mercy, while Mrs. Amy Ambrose spoke to the girls on the topic of Catholic dating. In a special way we give thanks to God for these speakers, who generously dedicated their time to help us form the youth into mature Catholic young men and women.

We also give thanks for the fact that many of the youth took advantage of the sacrament of Confession that was available to them during the Rosary and Adoration on Saturday evening. Eight priests, from both our Institute and the Franciscan Friars of the Renewal, heard confessions for about an hour and a half.

Finally, we give thanks to God for the small graces that often go unnoticed. For the grace of having over 250 youth spend an entire day, not on their sofas and phones, but in a holy environment, where they had the chance to exercise their souls, their bodies, and their minds and the chance to spend it with priests and religious. For the grace of being able to watch many of the youth who have been with us over the years grow up into responsible and life-filled young men and women, despite the obstacles in their daily lives. For the grace to form trustworthy friendships with the youth, so that from them they might be inspired to pursue a holier way of life. For us priests especially, for the grace to exercise our priesthood in the lives of those to whom the future of the Church belongs. Finally, for the grace to rediscover our own youth, by being young—with the youth—again[1] .

St. Paul exhorts us to “give thanks” (cf. 1 Thes. 5:18) in all things. Certainly, for all that took place this past weekend in Washington, DC, we must give thanks. As the sun sets over January, here in our little corner of the world there is a five letter name that dominates the headlines and conversations, but for us religious of the Incarnate Word, another five letter name will always reign supreme and be the true source of our hope for the continued victory in the name of “life”: Jesus Christ.

[1]“You young people are the ones who embody this youth: you are the youth of the nations and societies, the youth of every family and of all humanity; you are also the youth of the Church. We are all looking to you, for all of us, thanks to you, in a certain sense continually become young again.” (St. John Paul II, Dilecti Amici, 1)