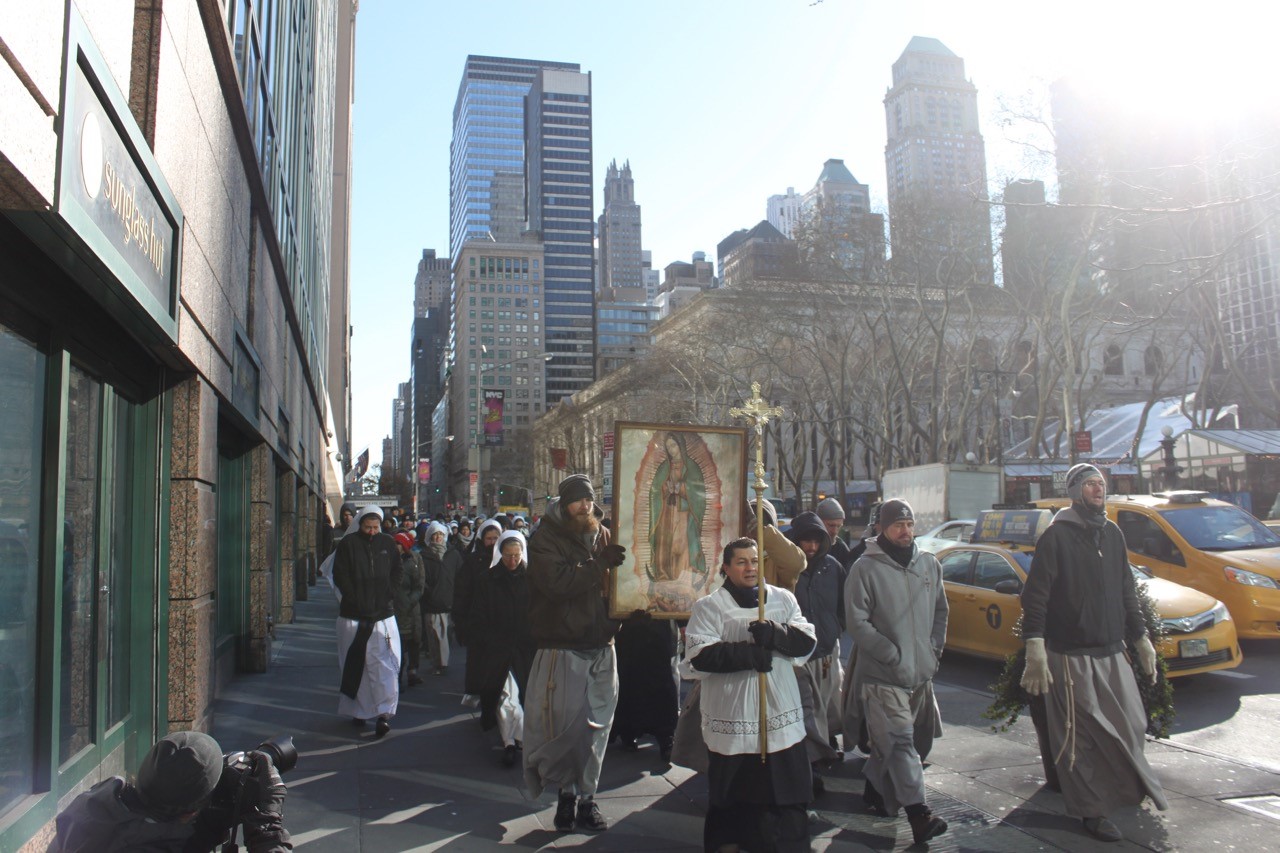 Some two thousand years ago Herod sent his soldiers to Bethlehem to destroy the lives of countless children (Mt 2:16). Some two thousand years later, countless innocent children are still being destroyed in the wombs of their mothers. On November 28th, 2017, twelve of us novices got to join the CFRs, the Sisters for Life, our SSVM sisters, and a bunch of lay people as we marched for life in New York City. It was a very blessed experience.

Part of what made it such a blessed experience was just how prayerful it was. We began with the Holy Sacrifice of the Mass at Holy Innocents Church in Manhattan. From there we processed all the way to a local abortion provider on Second Avenue, prayed outside, and then came back for Benediction after it was over. While in procession, we prayed every single decade of every single mystery of the rosary. Mary is always present with her Son, working out our salvation, and that day wasn’t any different. What made it even more special too, was that someone was behind in Eucharistic Adoration while we processed.

Another part of what made it such a blessed experience was the sheer number of religious that showed up that day. Only about 150-200 people showed up for the March, but a good majority of them were habited religious! It was just such so striking to see so many habited people walking the streets of New York together. The skyscrapers, the hustle and bustle, the horns honking all speak of this life, and sometimes violently at that, while our presence spoke ever so gently of the life to come. It was amazing to see how people responded to us as well. Some joined us in prayer, others came up and talked to us, while still others did something as simple as the sign of the cross as we passed by.

One of the things that Jesus told his disciples is that certain kinds of demons could only be cast out by prayer and fasting(Mk 9:29). The same thing no doubt applies to our culture as well. This March gave us plenty of opportunity not only to pray, but to “fast” as well. One of my favorite moments came in offering a lay woman a jacket as she was clearly shivering. Her response was simply, ‘I can hack it.’ May The Lord accept our sufferings that day (Col 1:24) for the salvation of souls, and for the ending of the scourge of abortion here in America.

Herod was not able to prevent Jesus from being born (Mt 2:12) some two thousand years ago, and Satan will not be able to stop God’s plans from taking place in our time either. I look forward to seeing what God has in store for us despite this terrible scourge, and I thank God that the CFRs started this March some nineteen years ago!

Viva Cristo Rey! Our Lady of Guadalupe, pray for us!