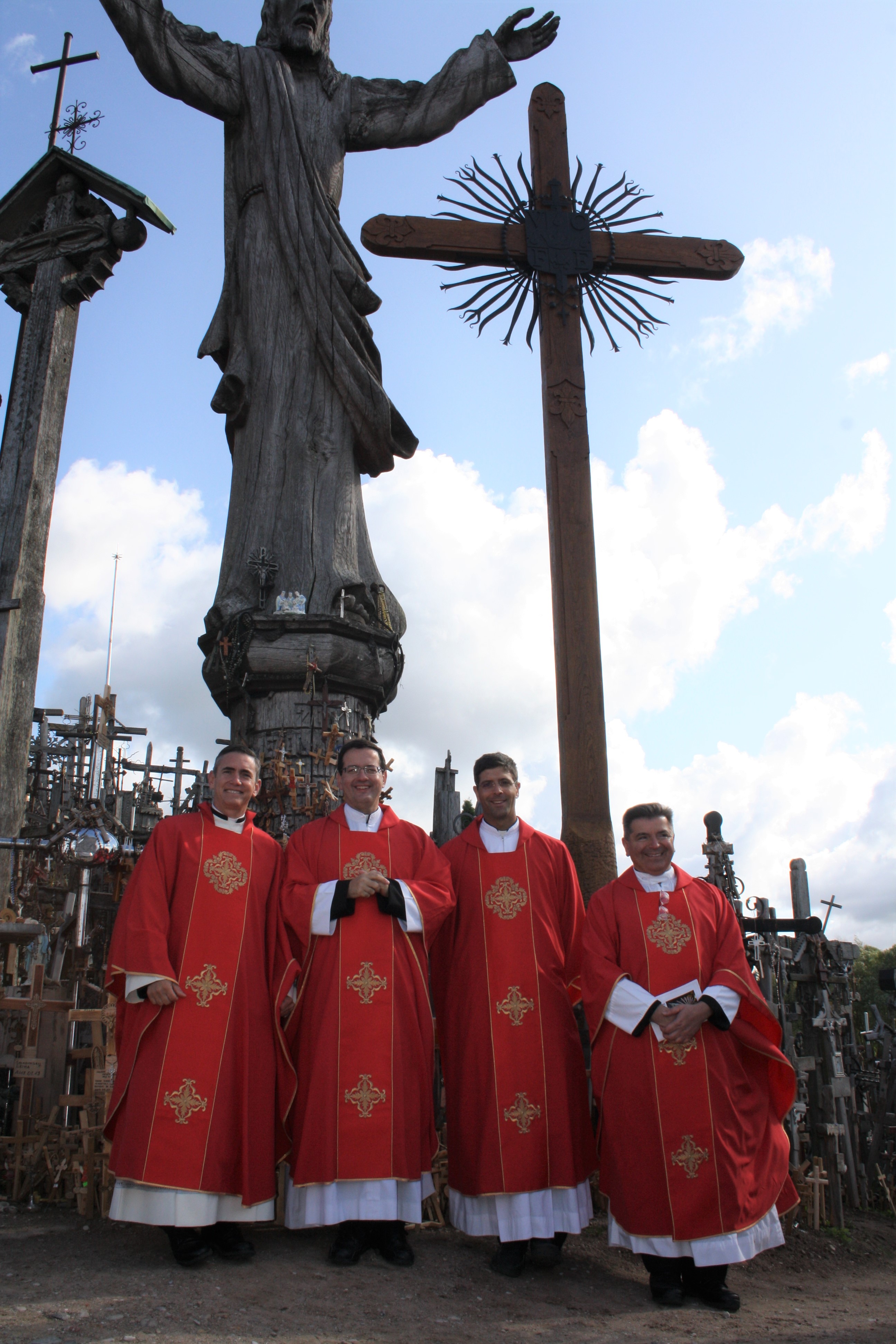 On the day of the Exaltation of the Cross, as a Congregation, we placed a cross in Lithuania’s most symbolic place, in her “heart”, that is, at the “Hill of Crosses”.
Lithuania is the land of crosses, as it has been known for a long time, since it is upon this hill where innumerable crosses are placed, each and every one of them with a different intention, whether it be in petition, thanksgiving, in witness to their faith which first inspired all of this: bearing witness to the faith in resistance to the oppression which surrounded them in times of Soviet occupation. It was the cross which gave them strength throughout the vicissitudes which Lithuania had to pass through.

In 2004, in thanksgiving to God for the diocesan approval of the Institute, we placed a cross there with the IVE shield carved into its center.
Thanks to the General House’s help to concretize this plan, we planted the largest cross possible on the Hill of Crosses, we rallied in order to leave a testimony of our love for the mission in Lithuania, and to ask the grace that in each of the missions of the IVE we would have the cross at the center, as a rudder and guide, and that each missionary may be intrinsically united to it, since everything which the cross touches it makes fruitful.

The cross of the IVE

It was carved by the sculptor, Ričardas Ramanauskas, made of oak (it was a difficult task to find a tree of such magnitude), a wood that is not affected by water, but rather, as they say here, the water hardens it all the more. In the same way, the tears of suffering strengthen us and encourage us to continue under its yoke.

The adornments of the cross are several; it has four fleur-de-lis carved into it to symbolize Mary, since it was through Mary that Jesus came to carry the cross. The extremities have pointed ends in an attempt to symbolize the petals of the same flower.

Instead of an image of the Crucified, the shield of the IVE (forged in iron) is in the center of the cross, as a sign that we want to be another incarnation of the Word. It is surrounded by a circular decoration in the form of flames. This is the famous “sauliute” -sun, very traditional of the Lithuanian crosses, and an expression of how we seek inculturation in each place of mission, assuming what is authentic of each people.

These rays which are born from the cross illumine our Congregation, like the Sun that is born on high, so that we may understand that it is in her (the cross) where we encounter the true meaning of the mission.

But why is the cross of such great magnitude (9 meters)? Because the more the cross is seen, the more it will attract souls to love, and many shall imitate the love shown by the cross, following Christ more closely. It will be the source of many holy vocations.

To sustain the cross, there had to be a cement base (1 meter, 10cm) which is not seen but is very important in order to keep it firmly there; in the same way, the sacrifices and prayers of so many missionaries are the foundation so that the cross is firm and others do not fall under its weight.

Looking from afar at the Hill of Crosses, you can say that it is a forest of crosses, many of which are very beautiful, large and small, light and heavy, but only one is ours, and this is the one which we must embrace, she is always to be seen, especially, when you raise your eyes to heaven, the place where we desire to arrive.
We placed a plaque in order to commemorate the event. We left in writing the motive for the cross and also put some words from our dear Fr. Buela, written on the occasion of his visit to this mystic place before we founded the mission in Lithuania.

Also, a few meters away, is the cross of Pope St. John Paul II, who in his visit left his cross as an act of thanksgiving to the Lithuanian people for their testimony to the faith, their witness for Europe and the whole world. It was an unexpected coincidence; the sculptor told us as soon as he finished the cross: “You are not the only ones who are able to accomplish the mission of placing a cross on the Hill today, but me too – in the visit of St. John Paul II to Lithuania, I had won a contest allowing me to make the cross that the Pope would leave here, but when I was making it I cut off a finger, so I could never finish it. It is now that I can fulfill that desire and, in a way, pay the debt I owe to the saint to leave a cross on this Hill.”

On one side of this Hill is the “Pope’s chapel”, a little roof under which the Holy Father celebrated the Mass. There, our priests, Gustavo Nieto, Franco Liporace, Juan Marcos Coduti, and I, celebrated the Holy Mass, accompanied by a choir of religious from the Servants of the Lord and the Virgin of Matará, with a musical background, and from that gathering of crosses a fresh wind stirred for the moment.

Afterwards, we concluded with a festive lunch with the Religious Family, together with friends, those connected to the Institute, and families of our religious in this country.

This is the cross that ought to unite us vigorously as so many soldiers of the Crucified, in order to combat the world and never flee from fear of being defeated, but to advance as intrepid and noble soldiers on a battle field, without fleeing cowardly nor taking a step backward, because it is the cross which calls out to us: Courage! Fight with honor!

I put the words of wisdom of a saint who was so enamored of the cross upon my lips- St. Louis Marie Grignion de Montfort: “Bind yourselves together in that strong union of heart and mind which is far superior, far more terrifying to the world and hell than the armed forces of a well-organized kingdom are to its enemies. Demons are united for your destruction, but you, be united for their overthrow; the avaricious are united to barter and hoard up gold and silver, combine your efforts in the pursuit of the eternal treasures hidden in the Cross; reprobates unite to make merry, but you, be united to suffer.”

Remember this beautiful sentence from the Imitation of Christ: “With as much violence as you suffer patiently, will you progress in divine love.”

Beneath the cross, the Virgin Mary gave herself to us as a mother. As she gave us her son on the cross, for let us ask for her help so that we can give ourselves to the crosses of each apostolate trusting and knowing that the cross is none other than that of the Incarnate Word.

The effects are delivered by increasing concentration of these neurotransmitters. cialis vs viagra You can buy Modafinil online and from local drug stores once your doctor prescribes medication.