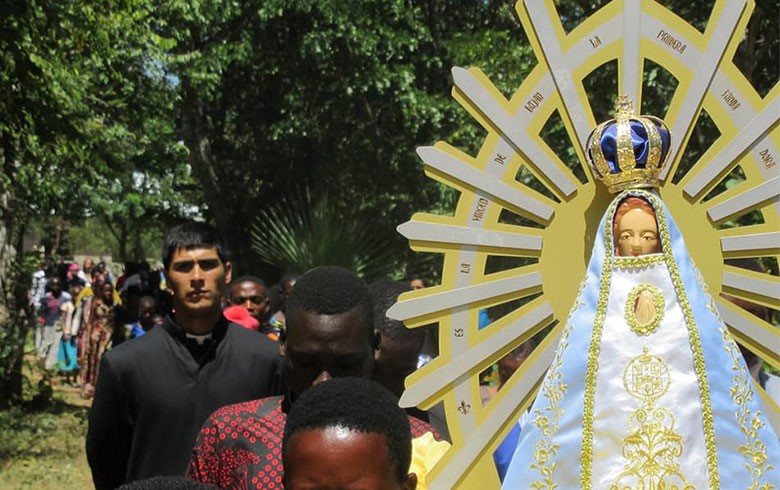 The laity of our Third Order have developed a great love for our Our Mother of Lujan. Yesterday (May 8) we gathered with them in order to celebrate her. At first, we thought about having a retreat-day in preparation for the feast, but having to follow the suggestions for the pandemic in order to avoid risks, we cancelled it. We also transferred the celebration of the Holy Mass to the parish church of Ushetu because it is the largest church and in this way the people could be seated while respecting a greater distance between themselves.

The great joy of the day of the Virgin of Lujan was increased as two novices, Boniface and Charles, received the cassock. These two are preparing to be coadjutor brothers. Together with them, four postulants received the cross in order to show that they were postulants of the IVE. The seminarians prepared the Mass, and the hymns that they intoned were greatly enjoyed by everyone, as it is not common to find a choir of only male voices, and they were singing strongly. We could sense in everyone a great joy for the feast of Our Lady, as well as for the postulants and novices. We are all moved to see the fruits of the houses of formation: our future missionaries.

After the Mass, we walked to the Novitiate which is about 15 minutes away. Once there we had a procession with the image of the Virgin, walking on the small path that connects the Novitiate to the major house of formation (philosophy). Afterwards, we projected a movie in the dining room, 15 minutes long, made by Fr. Jaime and the seminarians, which recounted the story of Our Lady of Lujan, the miracle of the wagons, the life of Negro Manuel, Fr. Montalvo, and the different chapels used up until the current Basilica. As it was recounted in Swahili by one of the seminarians, and as the images were passing by, you could tell that everyone was touched by it… they were struck by the love and devotion of Negro Manuel. The fact that Our Lady had chosen as her first servant a person from Africa, greatly impacted them, since she could have chosen anyone from among those present there in America.

After the video we had lunch outside, in a small forest which is near the dining room; a beautiful place. We took advantage of this since it was fresher, and there was much more space. It was very beautiful to see everyone eating as one big family, under the trees, enjoying themselves. It is a real picture of Africa: the family united, children everywhere, sharing simply, without formalities.

The “fogón” was held there, under the trees, with many participants. Each group had prepared to sing to the Virgin, or recite poetry or verse, etc. They have great creativity and they expressed how they had grasped the meaning of this devotion of our Religious Family.

We thank you for all your prayers, adn we ask that you pray for the perseverance and sanctity of our youth in formation, the seminarians, brothers, novices and postulants. Pray for our youth in “Voces Verbi”, for the adolescent girls of the “Maria Goretti” group, for our children, altarservers and “Watoto wa Yesu”. May they continue to grow in the spirit of our religious family and in love of the Incarnate Word and His Mother.

Steadfast in the breach!

It is the most commonly prescribed by doctors due to its safety and efficacy. viagra malaysia price The only cure left is to turn to ED supplements which have shown proven results.