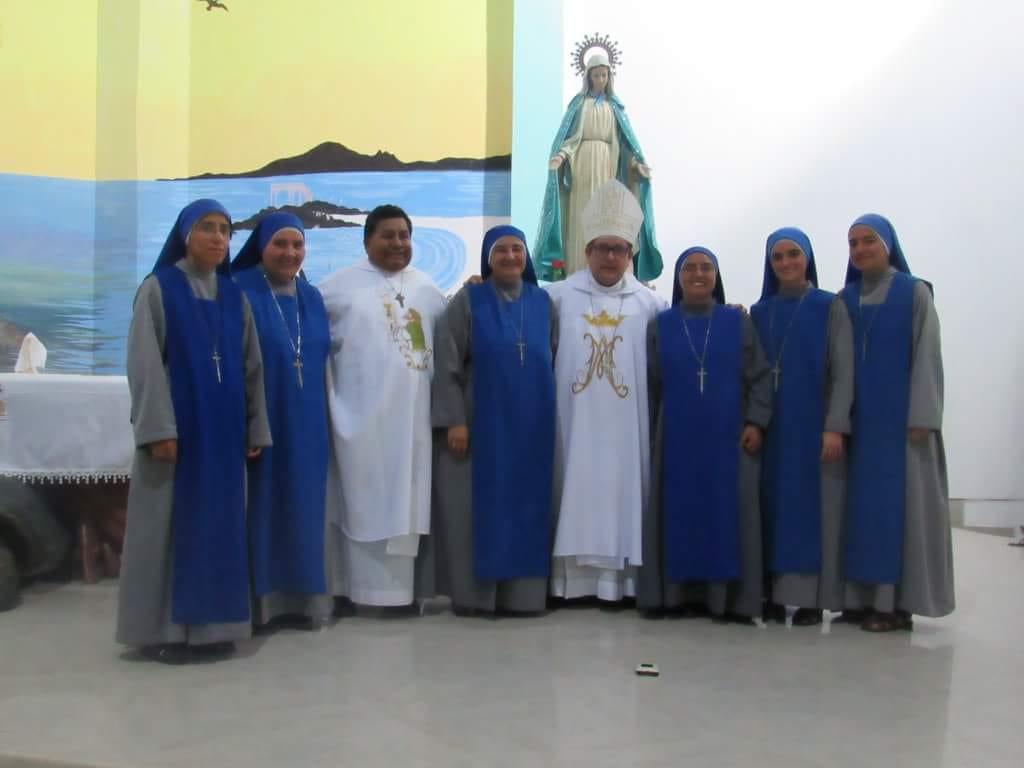 This is the refrain of a beautiful hymn that the Ecuadorian people sing in memory of the consecration to the Sacred Heart of Jesus that the martyr president Gabriel García Moreno made on March 25th, 1873, thus making Ecuador the first country ever consecrated to the Sacred Heart.

Our Institute –also consecrated to this Sacred Heart– ardently desires to extend His kingdom to each and every soul. For this motive, in an act of confidence in Divine Providence and so as not to be evasive to the missionary adventure, we are able –by the grace of God– to begin two new communities in this blessed Ecuadorian land, in two different diocese: one in the Archdiocese of Guayaquil, precisely in the outlying district of South Guasmo; and the other in the Vicariate of Galapagos, on Isabela Island. I shall recount these two events which are historic for our small Religious Family in Ecuador.

The new community “Santa Narcisa de Jesús”, located in South Guasmo in the city of Guayaquil, is formed by Mother María Divinae Gratiae and the sisters María de Iesu Christi and María Splendor Christi.
The Ecuadorian saint, Narcisa of Jesus, was chosen as patroness of the community since she dedicated a great part of her life to teaching catechesis, uniting her apostolic activity with a life of deep prayer and penance, reflecting in her life what she taught. Even today she continues catechizing by her incorrupt body which is venerated in the shrine located in the Guayaquil district of Nobol.

Servants of the Lord_Ecuador
The community “Santa Narcisa” before the incorrupt body of thier patroness.

We have chosen St. Narcisa as patroness for our sisters as their main apostolate will be catechesis in two parishes (“San Luis Rey de Francia” and “San Pío de Pietrelcina”) cared for by our priests in this zone, and they will also teach catechism at the parochial school “St. Pío”, which has approximately 400 students.

The opening of this new community took place on Sunday, April 22nd, with the Holy Mass in the Parish of San Luis Rey de Francia (“St. Louis King of France”), and was presided over by the Provincial Father, Jorge Montagna, IVE, and concelebrated by the Institute’s priests present in Guayaquil.

After the Holy Mass, the Blessed Sacrament was brought in procession to the convent of the sisters, a rented house two blocks away from the same parish. The procession was very lively, with numerous parishioners participating from both parishes, and was made solemn by the St. Louis parish band.

After placing the Blessed Sacrament in the new tabernacle, festivities proceeded. Since the house could not fit so many people, we followed the typical custom of the Guayaquil people and closed the street so we could celebrate there. The joy of the parishioners at such a long-awaited event was manifest in their participation and in their constant gratitude to the superiors for the new foundation.

The second new tabernacle was on Isabela Island, part of the enchanting Galapagos Islands.

As you all may remember, the Servants of the Lord opened our first community in the Galapagos Islands on the island of Santa Cruz four years ago. Now we have the grace of counting a second community, this time on Isabela Island, which is the largest of the Galapagos archipelago and whose name honors the Catholic Queen Isabella.

This island is appreciated not only for being the only island with six volcanoes (five of which are active), but also for the famous Galapagos penguins and the giant tortoises characteristic of the islands. But in order to arrive at this paradise, it is necessary to embark on an adventure: first you must arrive at Baltra Island, which is one hour by plane from Guayaquil, crossing from there to Santa Cruz Island, then, once in Santa Cruz embark on boat that will sail on the turquoise waters of the Pacific for two hours before reaching the beaches of Isabela.

That is how the new community under the protection of the Blessed Virgin, Star of the Sea began, on May 13th, with the Holy Mass presided over by the Bishop of the Galapagos, Msgr. Patricio Bonilla, OFM, and concelebrated by the pastor of the only parish on the island. In his homily, the Bishop exhorted us to be like the lilies of the island with our religious life: perfuming the island with the sweet odor of Christ. After the Mass, the Blessed Sacrament was brought to the house -situated on the same terrain as the parish- where the sisters will live. There, after the blessing, refreshments were shared with the parishioners.

The Community “María Estrella del Mar” with the Bishop of Galapagos and the pastor of the parish.

Msgr. Patricio Bonilla placing the Blessed Sacrament in the new tabernacle of the community.

The community is made up of the author of this chronicle and Sr. Santo Cristo. We will focus on giving religion classes in the Vicariate’s educational program in its three levels: Initial, Elementary, and Secondary; we will also work in parish ministry.

The people of Isabela are very happy at knowing that we will stay and live with them; it has been ten years since they have had the presence of religious on the island.

We entrust these communities to your prayers. May these two new tabernacles be the source of all our missionary activity.