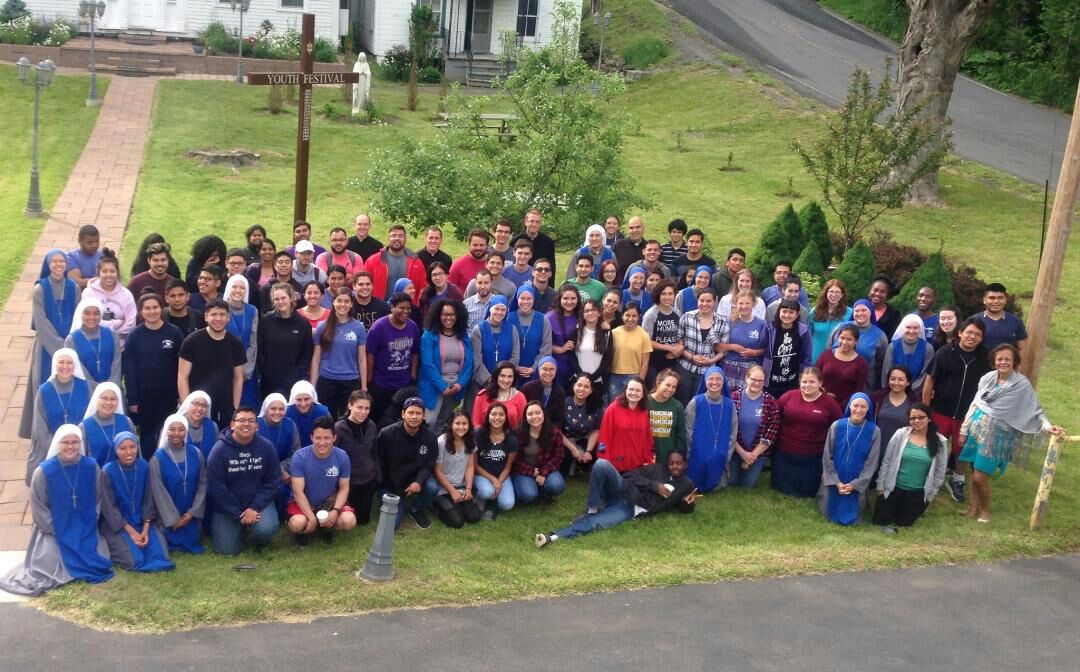 “As they were coming down from the mountain…” (Matthew 17:9)

We spent the last five days on top of a mountain – although figuratively speaking, there were some literal moments as well – where Jesus Christ was transfigured before the eyes and hearts of 75 university students and young adults. Some of these students had climbed the same mountain in previous years, and many others were doing so for the first time. They came representing many different countries and cultures: Haiti, India, Togo, Mexico, El Salvador, Brazil, Guatemala, Canada, Puerto Rico, Lebanon, the United States, and others. They came carrying different burdens and experiences, some with more or less knowledge of the faith, some with more or less commitment to following the person of Christ; some only weeks away from their entrance into religious life, others still in the very heart of the battle to rid their lives of sin and its effects. They came as they were; but we pray that they did not leave as they came.
This “mountain-climb” was realized in the annual event of the Religious Family known as Universitas, held in the St. Patrick Retreat Center in upstate New York. All those who came were offered spiritual, intellectual, human, and apostolic formation through talks, competitions, contact with God’s creation in nature and in neighbor, through meditation and Adoration and the Rosary and above all in the Holy Mass: through experiences authentically human, drawing each one nearer to things divine.
The intellectual formation was provided through conferences given by Dr. Pilar Calva, a geneticist from Mexico City who studied under Dr. Jerome Lejeune. Taking the occasion of the 50th anniversary of the promulgation of Humana Vitae as the basis for her talk, Dr. Calva shared her scientific expertise in order to shed light on the Church’s teachings on life issues.
The religious also gave several talks: on the masculine and feminine vocations, on evangelization, on building a Eucharistic culture; there were brief reflections at the end of the night with concrete suggestions for growing in the spiritual life; homilies that invited the young people to reflect more deeply on their call to give an adequate response to the many gifts God has poured upon them. Together we had the opportunity to adore the Blessed Sacrament on the Feast of Corpus Christi.
And of course we also had the chance to hike, to canoe, to play sports and games, to laugh and form new friendships.
The intellect encountered Truth; the will the Good; and Jesus Christ was source of all these things.
The days spent together were definitely blessed, however we know that we cannot remain there at the top of the mountain forever. Jesus also led His disciples back down the mountain after the Transfiguration. But we must remember to guard ourselves from the deception that what we saw at the top was not real. The joy, the light, the truth, the goodness, the abundance of life – this is reality, nearness to the fullness of being.
We must descend to bring light to a world that has grown accustomed to the darkness. Thus it remains essential to stay true to what was given us from the heights.
We entrust into the hands of Our Lady each and every grace, known and unknown, received in these five days, begging Her to preserve and multiply them. We also ask the intercession of Her great apostle, St. John Paul II, that these young people will not be afraid to be witnesses to the truths discovered on top of the mountain.
Verso l’alto!

Sr. Mary Star of Evangelization Peterson
Solemnity of the Sacred Heart of Jesus